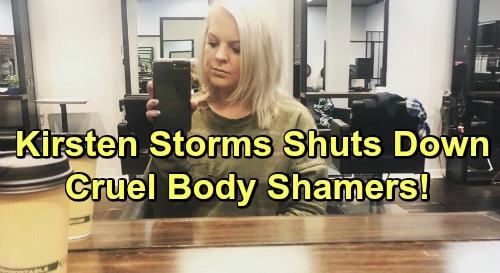 General Hospital (GH) spoilers reveal that Kirsten Storms (Maxie Jones) recently faced some hurtful messages on social media. While she was out shopping for her daughter at Target, Storms decided to take a pic of her outfit using her cell and a nearby mirror. She shared it with her social media followers and got plenty of positive responses, but some people also chose to criticize, too.

Storms was even accused of putting up an old pic to hide weight issues, but she quickly dismissed that idea. She maintained that it was indeed taken earlier that afternoon. It was no one’s place to suggest otherwise, but there are always those people who just have to slam and body shame.

That’s why the popular GH actress chose to speak out – both for herself and anyone else who needed to hear it. “Details about my health and medical conditions are nobody’s business, so I won’t go into my temporary weight gain to satisfy anyone’s thirst,” Storms said. She also mentioned that some fans concentrate on her weight and not much else.

“I will say that it’s sad to see some people focus only on the status of my body (and when focusing on weight it is never meant in a positive way. ‘Losing’ or ‘gaining’ – it’s a judgement and it’s shameful),” Storms said. This is definitely one of those cases where if you don’t have something nice to say, don’t say anything at all.

There’s just no reason to get in the comments section of somebody’s post and complain about how they look. What does it accomplish to send Storms messages that might make her self-conscious or even just ruin a perfectly pleasant day? Who really wants to be the person? Thankfully, Storms tries not to let the haters get her down. As long as she’s happy and confident, that’s all that matters.

“I’m healthy and I feel good – at ANY size, which is what matters to ME the most,” Storms said. “Comments with a snarky undertone only make me feel sad for the person who typed it and I truly hope their life sucks less tomorrow.” Storms received lots of support from fans who understand her point of view. They were all eager to chime in on this.

One General Hospital viewer said, “It’s honestly infuriating & we can all do better as human beings to lift each other up, instead of tearing others down.” Another fan insisted, “Kirsten you are great you keep doing you! People need to stop criticizing others and worry more about themselves.” One more said. “Kirsten you are a very beautiful and talented actress! Good for you at your response to the naysayers!”

@target shopping for Harps. My kid looooves shoes (she gets that from her Daddy), but she goes thru them like it’s her job. The boots I bought her for Christmas already have holes in them and she is still rockin’ em. Oh to be 5 yrs old… Rainy day outfit: Black Levi skinny jeans, Black Frye “Billy” Cowboy Boots, Led Zeppelin Tee, Black Jean Jacket & a messy top knot. Purse is my Grandma’s Gucci bag from the 70’s that I just had reconstructed (thanks to @barinileather for making it look new again! 🙌🏼).