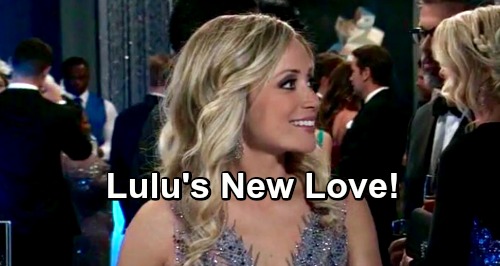 General Hospital (GH) spoilers tease that Lulu Falconeri (Emme Rylan) will turn to her bestie for advice. Lulu will seek Maxie Jones’ (Kirsten Storms) help as she deals with her problems. Things have been rough on Lulu ever since Dante Falconeri (Dominic Zamprogna) left town. The fact that he came back briefly before departing again only made matters more difficult.

Lulu thought they were going to get their marriage back on track. She was all set for their happily ever after, but Dante’s issues had to be dealt with. He’ll remain out of the picture while he completes deprogramming, but how long will that take? Lulu has no way of knowing if Dante will ever even return. She’ll have so many difficult thoughts swirling around in her brain, so she’ll need to vent to Maxie.

Once Maxie realizes Lulu’s really struggling, she’ll resolve to help her. Maxie will hate the idea of her friend being in such pain. She’ll feel like Lulu is lonely, so she’ll recruit Peter August (Wes Ramsey) for help with a mission. Maxie will hope whatever she’s got in mind will lift Lulu’s spirits.

However, GH fans can expect some twists and turns along the way. General Hospital spoilers say Maxie and Peter’s plan will lead to some unexpected results. It’s doubtful Maxie would resort to matchmaking so soon. She’s been supportive of Lulu and Dante as a couple, so it’s tough to imagine her just giving up on them just yet.

Of course, that doesn’t mean Maxie won’t accidentally play Cupid. Perhaps Maxie will get Peter to give Lulu more responsibilities at The Invader and keep her mind off her troubles. We know Lulu will help cover the new DoD story that Molly Lansing-Davis (Haley Pullos) suggested. That’ll put Lulu in Willow Tait’s (Katelyn MacMullen) orbit as she does research.

GH also finds reasons for Lulu to interact with Harrison Chase (Josh Swickard) – like their seemingly pointless scene on Friday, May 24. The only real point of them interacting was probably to keep them interacting. General Hospital may be keeping their options open romantically. It’s best if they remind us that these two know each other. That way it won’t be so out of left field if they became a couple.

Lulu may even collaborate with Chase on the cult story. He’d loved to lock Shiloh Archer (Coby Ryan McLaughlin) up and throw away the key – or at least make Shiloh a hated man and drive him as far way from Port Charles as possible.

Regardless, Michael Corinthos (Chad Duell) has been stepping up for Willow lately. His budding romance with lying Sasha Gilmore (Sofia Mattsson) may also be doomed. If Michael ends up with Willow, Lulu may be waiting in the wings for Chase.

Will Maxie’s plan affect Lulu’s love life? Do you think GH is laying the groundwork for a Chase and Lulu pairing down the road? We’ll give you updates as other news comes in. Stay tuned to the ABC soap and don’t forget to check CDL often for the latest General Hospital spoilers, updates and news.