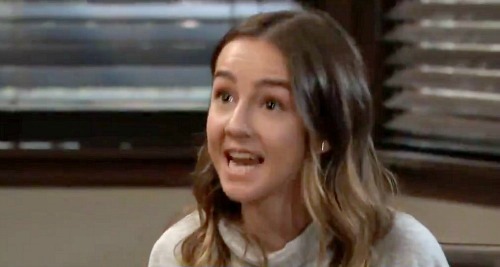 General Hospital (GH) spoilers reveal that Kristina Corinthos-Davis’ (Lexi Ainsworth) family will face a difficult battle. They’ve been trying to get through to Kristina at her intervention, which is being supervised by Dr. Neil Byrne (Joe Flanigan). Kristina trusts Michael Corinthos (Chad Duell) a great deal, so he’s been taking the lead on gently talking some sense into her.

It’s clear that Kristina’s family members just want to save her from Shiloh Archer’s (Coby Ryan McLaughlin) dark side. They can see that Shiloh is scum who only wants to manipulate Kristina and drive her away from the people who care about her. Although Kristina seemed slightly more receptive than usual on Monday’s GH episode, April 22, she also admitted that she just couldn’t walk away – and it’s because of her promise.

General Hospital spoilers say Kristina will stand by that promise as this intervention continues. Does she genuinely want to be at the Dawn of Day house or is there more to it than that? Kristina might’ve seen the light somewhat, but she also handed Shiloh dirt on Alexis Davis (Nancy Lee Grahn). She knows her trust offering could be used against her mom, so that must be weighing on her mind right now.

Of course, GH spoilers say Kristina won’t want to divulge what she’s spilled or admit she was wrong. Instead, it looks like she’ll dig her heels in and insist that Dawn of Day is what she wants. Kristina did admit that the DoD community accepts her without judging her for her past. They only care about her present and future, which is awfully appealing to mistake-prone Kristina.

Unfortunately, Kristina feels like she’s never measured up to her family’s expectations, especially Alexis’. Now that Alexis knows how discouraged Kristina has become, she wants to change and help her daughter see how loved she is. Since Kristina will stand her ground for a while, Alexis will just have to be patient and hope for the best.

As for Sonny Corinthos (Maurice Benard), he’s had enough of Shiloh’s twisted mind games. He desperately wants to break this hold Shiloh has on Kristina. Sonny knows what Shiloh is up to and that Kristina gave him leverage on someone, but he assumes that someone is him.

The truth will come out sooner or later, but Sonny should be just as determined to protect Alexis. He won’t want Kristina feeling guilty over something Shiloh roped her into. Sonny certainly won’t stand by and put up with this a disturbing cult leader’s blackmail! In fact Jason Morgan (Steve Burton) will be instructed by the mob boss to eliminate Shiloh on this a new GH episode this week, April 22-26.