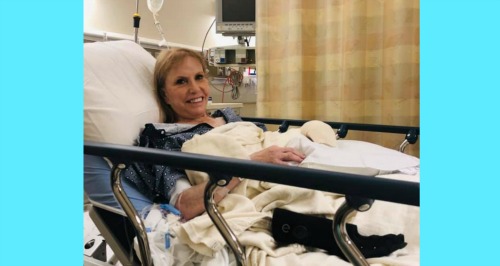 General Hospital (GH) spoilers reveal that one ABC soap star faced an accident and recently landed in the hospital. GH fans know Leslie Charleson as Monica Quartermaine – and will recall that she took a tumble last year after tripping over her dog, Riley Rose. Charleson had to be replaced with Patty McCormack temporarily, but she recovered from her leg injury and reclaimed her role at GH.

Unfortunately, Charleson had another mishap involving an animal, which injured her hand this time. On Facebook, Charleson posted about her latest accident and revealed what led to it. “Ooops, I did it again! Just a little hand surgery for a fracture that I got rescuing my tortoise off of a hill,” Charleson said. She just wanted to give everyone the scoop and offer a photo in her hospital bed.

Charleson was sporting a huge smile in the pic, so she’s obviously in good spirits. She’s a tough cookie and will heal up for future GH episodes. Last year, Monica played a big role in all the Nelle Benson (Chloe Lanier) drama at the Quartermaine mansion. She had to be there when Nelle went flying down the staircase. The episodes were already written, so GH had no choice but to find a recast.

McCormack proved to be an excellent one – although there’s obviously nothing quite like the real thing! General Hospital fans rooted for Charleson’s comeback and were happy to see her back on screen eventually. It’s doubtful a recast will be required this time around since there haven’t been too many Monica sightings lately, but we’ll keep you posted on that.

Let’s hope Charleson’s on the road to recovery soon and can get back to all her usual activities. GH viewers hate to see their favorite stars hospitalized! As for what’s next in Port Charles, General Hospital spoilers say several storylines will heat up. The baby swap plot and fake daughter storyline have some especially huge developments ahead. GH fans won’t want to miss all the action!

What do you want to see next on General Hospital? We’ll give you updates as other GH news comes in. Stay tuned to the ABC soap and don’t forget to check CDL often for the latest General Hospital spoilers, updates and news.