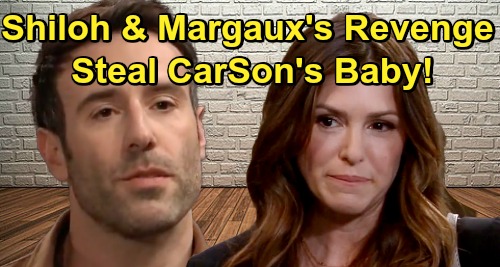 General Hospital spoilers tease that Margaux Dawson (Elizabeth Hendrickson) is furious with Sonny Corinthos (Maurice Benard) for taking everyone she cares about from her. Margaux could want revenge and join forces with Shiloh Archer (Coby Ryan McLaughlin) to steal Sonny and Carly Corinthos’ (Laura Wright) baby to raise as their own.

Carly Expresses Concern About Her Baby

General Hospital’s Carly visits her son Morgan Corinthos’ (Bryan Craig) grave and shares her concerns about her new baby. Carly is afraid of losing this child like she lost Morgan and will probably ask Morgan to watch over and protect his unborn sibling. Will Carly get her wish or will revenge cost her the baby she wants so badly?

General Hospital’s Sonny killed Margaux’s father on the orders of Joe Scully (Robert Miano), and Margaux was unable to prosecute Sonny for that crime. Margaux blames Sonny for taking her father from her even though Sonny exposed Margaux’s mother’s part in her father’s death.

Margaux’s mother asked her lover Joe to get rid of her husband and got just that, and let Margaux believes others were to blame all of her life. Margaux blames Sonny for exposing her mother’s part in the crime and holds him responsible for losing both parents.

Sonny Exposed Shiloh As A Rapist

General Hospital’s Sonny exposed Shiloh as a rapist and Margaux is having a hard time believing it. Margaux sees Shiloh as a kind and loving individual who only wants to make the world a better place. Margaux doesn’t believe anything Sonny says against Shiloh regardless of the evidence to the contrary.

Sam McCall (Kelly Monaco) is in the hospital after being drugged by Shiloh, and Jason Morgan (Steve Burton) threw Shiloh down a flight of starts when he tried to rape Sam in the lighthouse.

Why is Margaux so convinced that Shiloh is a good man? Does Margaux have more significant ties to Shiloh than anyone realizes? Is Shiloh someone important in Margaux’s life that has nothing to do with Dawn of Day but something much more personal?

General Hospital’s Jason and Michael Corinthos (Chad Duell) will both get involved in protecting Wiley from Shiloh. Shiloh will be furious when everyone rally’s to protect the baby. Could Shiloh and Margaux join forces to get revenge and take Sonny and Carly’s baby? Shiloh wants his hands on every child he can get for his DOD cult, so stealing a baby is no worse than raping a woman.

Stealing Sonny and Carly’s baby would be the perfect revenge for the two people how blame Sonny for losing everything. Could we have months of trying to find another Corinthos child? Come back to CDL for more General Hospital spoilers, news and updates!