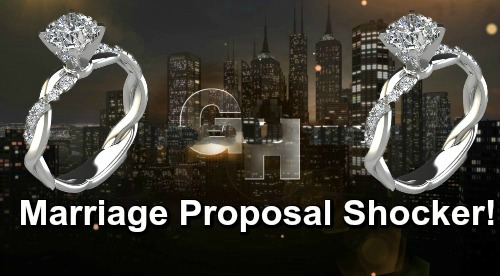 General Hospital (GH) spoilers tease that a marriage proposal is on the way, but it’s one that fans never saw coming. That’s because the characters involved aren’t even dating right now! GH has quite a shocker in store, so let’s look at what’s coming up during the week of July 1-5.

First, Franco Baldwin (Roger Howarth) will catch up with Scott Baldwin (Kin Shriner). They’ll most likely discuss Franco’s upcoming wedding reception with Elizabeth Baldwin (Rebecca Herbst). General Hospital viewers know Franco and Liz’s wedding wasn’t exactly fancy! They got married while Franco was behind bars, so this is their chance to celebrate with friends and family members.

Scott will be glad that Franco’s found love and happiness, but what about Scott? Franco may sense that Scott’s a bit lonely these days. It’s been a while since Scott put himself out there, so Franco will try to nudge him along. General Hospital spoilers say Franco will push Scott to get back in the dating game. He’ll think there’s some lucky lady just waiting for Scott to sweep her off her feet.

Scott may not be so sure about this, but he’ll definitely feel like he could use a partner in life. He’ll want a woman he can be himself with, care for and be cared for in return. Scott will have some desires that leave him unfulfilled, so that’ll be important as his storyline moves forward.

General Hospital spoilers say Scott will get updates on Bobbie Spencer’s (Jacklyn Zeman) condition later. She was recently diagnosed with type 2 diabetes, so she’s worried about managing it and making sure no further health complications result from it. Scott will ultimately decide he’d rather be familiar Bobbie and go through a dating nightmare. He’ll feel like they could have a wonderful life together, especially since she’s going up against a lot.

Scott will want to be there for Bobbie as her husband, so he’ll pop the question out of the blue. At some point, Scott will feel like his intentions have been misunderstood. Bobbie may not want a pity proposal, but that’s not what this is. It’ll come from a genuinely sweet place, so Scott may convince Bobbie of that soon enough.

However, it’s doubtful Scott will convince Bobbie they should dash to the altar. This is way out of left field, so Bobbie may insist her answer is no. Even so, it’s nice of Scott to offer! GH fans will just have to hope that Bobbie either comes around or Scott finds his perfect match down the road.

Are you hoping Scott finds love? Who would your top love interest for Scott be? We’ll keep you posted as other GH news comes in. Stay tuned to the ABC soap and don’t forget to check CDL often for the latest General Hospital spoilers, updates and news.