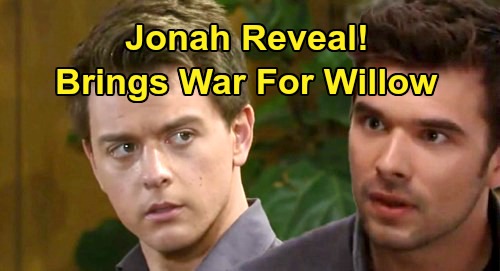 General Hospital (GH) spoilers reveal that Willow Tait (Katelyn MacMullen) and Harrison Chase (Josh Swickard) could be headed for trouble, but let’s focus on the calm before the storm first. GH fans know Willow recently had a pregnancy scare. When she finally admitted it to Chase, he was a bit hurt that Willow wouldn’t tell him something like that.

However, they managed to get over that little bump in the road and have a deep discussion about their future. Chase confessed that when he realized Willow had a false baby alarm, he felt both relief and disappointment. Willow couldn’t help but offer a satisfied smile at that. It proves what a great match they are since that’s exactly what Willow felt following her negative pregnancy test results.

While we’re on the subject, can we just talk about how fabulous Chase and Willow are together? They sparkle like crazy! Swickard and MacMullen managed to take what might’ve been dull scenes in incapable hands and turn them into something really wonderful. It was nice to see a soap couple getting honest and having a realistic discussion about what’s ahead.

Unfortunately, Willow and Chase can’t predict what’s coming next. “Wiley Cooper-Jones” isn’t Willow’s biological child and that could strike quite a blow down the road. Willow’s pregnancy scare made her realize she might be more ready for motherhood than she thought. Nevertheless, she added that she didn’t want to confuse her longing for “Wiley” with longing for another baby.

Those could be some important hints about where this storyline is headed. We’ve got Willow, who’s ready to be an instant mommy but knows the timing isn’t right. Her comment also indicated that her baby desires were really more about “Wiley.”

So when the truth about “Wiley” comes out and Jonah Corinthos is being raised be Michael Corinthos (Chad Duell) alone, it’ll provide that mommy opening for Willow. She’ll be crushed that “Wiley” isn’t her biological son, but it could make her even more drawn to him in a way. Willow’s child is gone and she may wonder if she even wants to go through the pain of losing another one. Jonah may be her only shot at motherhood if she can’t get past her grief over the Wiley loss.

Chase will want to be there for Willow after the baby swap shocker, but he may grow frustrated when she leans on Michael instead. It’s easy to imagine Willow insisting she has to step up and help Michael. General Hospital spoilers say he’ll need all hands on deck as he tackles being a full-time dad.

This could certainly lead to major tension between Michael and Chase. They’ve become good friends, but you can bet they won’t be if Michael steals Willow’s heart. It’s a shame to think about losing MacMullen and Swickard’s chemistry, which is both sweet and sizzling.

Even so, we should look on the bright side. This could provide the opportunity for an angsty path back together. Sometimes the challenging road to a reunion is even better than watching a couple on cloud nine.