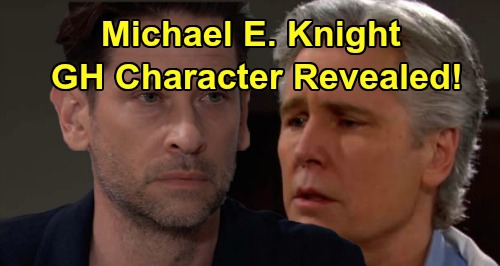 General Hospital (GH) spoilers tease that a mysterious new character is headed to Port Charles, so fans are curious what he’s all about. You may have heard that Michael E. Knight has joined the GH cast and will make his debut soon. The show’s keeping the details of Knight’s character under wraps, but there are some clues for us to ponder.

For starters, let’s consider what James Patrick Stuart (Valentin Cassadine) said after Knight’s impending arrival was announced. Stuart happens to be close friends with Knight in real life, so he’s ecstatic about this cast addition. He passed along some comments to Soap Opera Digest that offer a clue about Knight’s looming storyline.

Stuart said, “I am thrilled, are you kidding me? I love that guy. He’s excited, too; it’s been a while for him. It’s going to be really fun to have him on my turf. I would love to share scenes with him.” Some General Hospital fans took that to mean Knight would be connected to Valentin’s story, but that doesn’t seem to be the case if you look closely.

Stuart said he “would love to share scenes.” He didn’t say that they actually would share scenes. Stuart probably would’ve been more cryptic if he was trying to conceal something. He genuinely doesn’t seem to have any scenes in the works with Knight just yet, which means this character probably won’t have any initial connection to Valentin.

Stuart’s comments sound more like he’s just hopeful Knight’s character will eventually cross paths with Valentin, so perhaps we can indeed rule out a Valentin-related plot here. That narrows things down a lot for us. What other storylines are going on? We’ve got the Wiley Cooper-Jones and Jonah Corinthos baby swap, but there doesn’t seem to be a need for Knight’s character in that storyline.

It’s possible Sonny Corinthos (Maurice Benard) and Carly Corinthos (Laura Wright) will see some sort of specialist for their baby, but their current doctor seems to have things covered so far. However, another HUGE story right now revolves around Franco Baldwin (Roger Howarth). There’s certainly a place for Knight’s character in the memory-mapping mayhem.

It’s worth mentioning that Knight’s last soap role as a very eccentric doc on The Young and the Restless. He played Dr. Simon Neville, who was all about risky protocols in the name of progress. That might’ve given GH the idea to do something similar.

General Hospital spoilers also point to desperation for Liesl Obrecht (Kathleen Gati) and a possible hostage situation. There’s a chance Knight’s character could be a colleague Liesl knows from somewhere. It might be a drastic strategy Liesl tries with his help. It looks like Liesl may kidnap Franco as part of her efforts to help him, so Knight’s character could come on the scene soon after.

Whatever the case, GH buzz says Knight is playing a smart and unconventional doctor. He plays the part well and looks the part, too. We’ll give you updates as other GH news comes in. Stay tuned to the ABC soap and don’t forget to check CDL often for the latest General Hospital spoilers, updates and news.