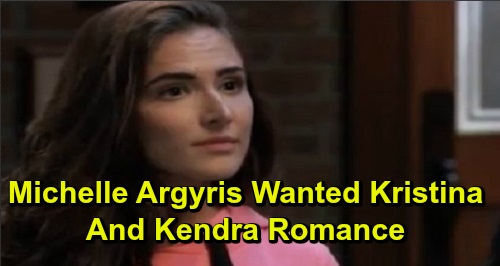 However, Argyris was thrilled to be part of the cast for a while. In an interview with Soap Opera Digest, Argyris talked about the auditioning process and revealed other fun secrets regarding her wild character. At first, Argyris only knew she was taking on the role of a scheming holistic gym trainer. It wasn’t until later that she was told about the Kiefer connection, which led her to do some research.

As Kendra’s dangerous layers were peeled back, Argyris embraced the chance to play some dark material. “My character just kept getting more and more evil, and I was like, ‘Okay! Here we go!’” Argyris said.

Argyris also admitted playing Kendra taught her a valuable lesson. It turns out General Hospital fans inadvertently helped with that. After Argyris’ debut, she couldn’t help but look at the feedback online. As you can imagine, there wasn’t a lot of love for Kendra.

Of course, Kendra was never meant to be a likable character since she was targeting Alexis, but it was still hard for Argyris – who admitted she’s the type of person who just likes being liked! Once Argyris took herself out of the equation, she was able to enjoy playing villainous Kendra. She suggested “the fact that Kendra was so unlikable was an extremely freeing feeling, because it takes away that pressure of trying to be liked.”

Argyris confessed that she was thrown a curveball during her last day on set. She had already filmed the bulk of her final scenes and thought she was just showing up to play dead in the car. Argyris had a moment of panic when she suddenly realized she had more dialogue, but she rushed to learn her lines and it all worked out.

Although Argyris had a blast filming at General Hospital, she was disappointed that she couldn’t fulfill a soapy dream. Argyris said she would’ve loved a “really romantic, cheesy scene” where she got to share a passionate kiss with someone. When asked who she would’ve wanted Kendra to be set up with, Argyris’ answer was surprising: Kristina Corinthos-Davis (Lexi Ainsworth). “I would have love, love, loved to have had a storyline with Kristina,” Argyris insisted.

That actually would’ve been an interesting pairing. It might’ve been fun if Kendra seduced Kristina as part of her revenge plot on Alexis. GH chose another route instead, but Argyris suggested she wouldn’t mind playing a twin or even getting her dream kiss on another soap if the opportunity comes along.