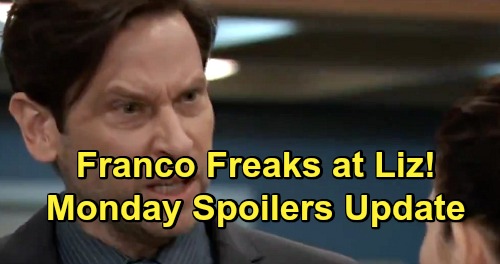 General Hospital (GH) spoilers update for Monday, April 1, tease that Laura Webber (Genie Francis) will choose to be honest with herself. She won’t know if she’ll ever be able to trust Dr. Kevin Collins (Jon Lindstrom) again, so she’ll confide in Alexis Davis (Nancy Lee Grahn). Of course, Alexis isn’t the best person to turn to for romantic advice. She’s hung up on the bad boy version of Julian Jerome (William deVry), so she’s got her own problems to deal with.

Nevertheless, Alexis will want to help if she can. She may contend that if Laura and Kevin love each other enough, they can figure it out. They have a strong connection, so they should be able to get over this hurdle in time. For now, Kevin will head to his arraignment with Nora Buchanan (Hillary B. Smith) by his side. This former One Life to Live attorney will return to GH and step up for her new client.

Kevin knows plenty of people hate his guts at the moment, but Lucy Coe (Lynn Herring) isn’t one of them. She’ll assure Kevin that she’s got his back, so that should give him some comfort on Monday. Meanwhile, Franco Baldwin (Roger Howarth) will be aghast over Elizabeth Webber’s (Rebecca Herbst) defense of Kevin. He won’t see how she could feel anything but outraged, so she’ll try to explain.

Liz may suggest that Kevin is a good guy who made a bad call. She’ll understand that Kevin’s actions caused pain and ultimately led to the death of Kiki Jerome (Hayley Erin), but he didn’t wield the murder weapon himself. This is a complicated situation, so Liz will hope to change Franco’s perspective.

Rocco thought his family was finally back together for good, so it’ll be a crushing blow for the kid. This will obviously be excruciating for Sonny as well, so Carly will be there for him and they’ll both be there for Lulu. As the distressed wife and mom Dante let behind, General Hospital spoilers say Lulu will have a lot to work through.

At the Metro Court, Maxie Jones (Kirsten Storms) will admit she was mistaken. She’ll tell Nina Reeves (Michelle Stafford) that the DNA test results proved Sasha Gilmore (Sofia Mattsson) is her daughter. Valentin Cassadine (James Patrick Stuart) will pipe up about the previous DNA tests and express outrage over the doubt. He’ll keep his lie going strong and the altered results will back him up.

When Nina demands to know why Maxie questioned Valentin’s claims, Peter will speak for her. He’ll note that Liesl Obrecht (Kathleen Gati) has leverage, so they assumed a fake daughter plot was a plausible explanation. After the confrontation winds down, Sasha will flip out. She’ll gripe to Valentin and fear that things are really getting out of hand.