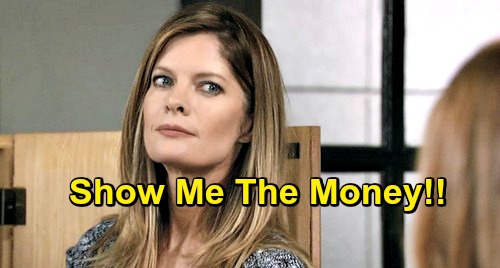 General Hospital (GH) spoilers tease that Michelle Stafford will be leaving the role of Nina Reeves in the coming weeks. It was a casting shocker that rocked the soap opera community this weekend. Many GH fans were stunned and weren’t sure how to process the news that Michelle is leaving GH to reprise the role of Phyllis Summers on Y&R – not to mention the shocker that well-respected actress and Daytime Emmy winner Gina Tognoni was fired from the role she’d had for 5 years.

Michelle decided to leave after the ABC soap opera was not able to come to a new contract agreement according to Daytime Confidential. Reportedly, it came down to money. She knew her worth and allegedly ABC wasn’t ready to pony up and pay her accordingly.

The GH community is stunned by the news. Many fans felt that Michelle’s character Nina was a one dimensional and she had plateaued. For that reason, some viewers are not sad to see her leave. In fact, those fans noted they hope that Nina is not recast as the character is on a nonstop cycle going nowhere with Valentin Cassadine (James Patrick Stuart).

Nina’s exit will be shocking as she has been a big part of GH for almost five years. Stafford made the role her own and reached super couple status when Nina was with Franco Baldwin (Roger Howarth). However, their relationship ended and Nina ended up with Valentin.

It’s possible that GH will kill her off. However, it would make much more sense for TPTB to recast the role. But how do you recast a role placed by a soap diva like Michelle Stafford?

Y&R got lucky when they brought Gina Tognoni in for the role of Phyllis Summers in 2014. The actress had big shoes to fill and she did it without missing a beat. Is it possible that GH could find someone that could pull off Nina and have as strong as of a presence on the air? Why not Tognoni herself, she’s currently unemployed and eminently qualified.

Eventually, most fans would support the role being recast. It’s clear that the soap will not be able to resolve all of Nina’s storylines before Stafford leaves. Instead of killing her off and dropping several storylines into the already overflowing bin of dropped GH storylines, it would be better to recast the role and have another actress take over. As long as the newbie understands that it will be an uphill battle to get the General Hospital fans to accept her as Nina.

How do you feel about Michelle Stafford’s exit? Do you want them to recast the role? Are you shocked she decided to leave?Don’t forget to come back to CDL later for more General Hospital (GH) spoilers, news, and casting updates!