The Young and the Restless Spoilers: Gina Tognoni Speaks Out On Y&R Exit – Y&R Costars & Fans Weigh In On Controversial Decision 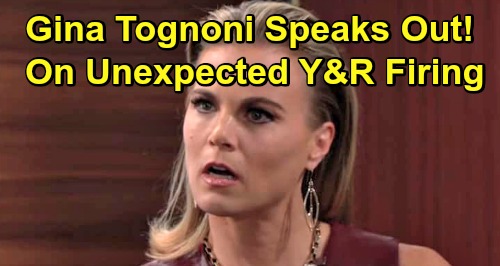 The Young and the Restless spoilers has some updated information to pass on about the recent firing of Gina Tognoni, who has portrayed Phyllis Summers on the CBS soap since 2014. As CDL previously reported, Gina was suddenly let go from Y&R to make way for Michelle Stafford to reprise the role of Phyllis.

For fans of Michelle Stafford’s version of Phyllis, this is great news. But fans of Gina Tognoni weren’t happy with the revelation and are wondering how Gina’s doing with the whole situation.

Shortly after the news broke about Gina’s firing and Michelle Stafford’s return to Y&R, Gina released a statement on her social media accounts. S

he wrote: “Five years ago, I was blessed to embrace the incredible character of Phyllis Summers Abbott. I am beyond grateful for the creative experience that The Young and the Restless has given me as well as the amazing relationships I made with the cast, crew/staff, producers, and writers. I love my Genoa City family, which made it easy to give 110% each day. My long commutes always went smoothly because I loved where I worked and the people I worked with!”

Gina continued: “My thanks to Sony Pictures Television and CBS and a special thank you to Y&R viewers for their love and support. I wish Y&R continued success and everything it richly deserves.”

Could Gina’s final phrase in reference to Y&R, ‘…and everything it richly deserves’ contain a hidden double meaning? What do you think the suddenly fired Gina thinks Y&R deserves?

Gina’s followers have been replying to her statement in droves. Most have expressed surprise that Gina will be vacating the role of Phyllis and many aren’t happy with the news. One fan replied: “You deserve so much better than this. I’m appalled and disappointed. Your Phyllis is one of the main reasons I watch Y&R. This is a tremendous mistake.”

And another fan commented: “I’m so sad you’re leaving! I’ll admit, when you came in, i hated it and missed Michelle, but I’ve gotten so used to having you as Phyllis and you work the role VERY well!!”

Gina’s fellow actors have been weighing in as well. Alice Hunter, who portrayed Kerry Johnson on Y&R and worked closely with Gina, posted the following reply to Gina’s statement: “You are the smartest, sharpest, deepest, and most layered actor I saw on that set and I enjoyed watching you work beginning to end. Thank you for pouring your heart into Phyllis and demonstrating how to love and understand such a deeply flawed character. I’m better for having worked with you. X”

Melissa Ordway, who portrays Abby Newman on Y&R, simply said: “Love you so much @ginatognoni.” And Beth Maitland, who portrays Traci Abbott, said: “Love you for reals.” Finally, Courtney Hope, who portrays Sally Spectra on neighboring soap The Bold and the Beautiful, had this to say: “You’re iconic. I will miss seeing your brilliant work and smiling face in the halls! You deserve the beauty of whatever comes next!”

It certainly seems that Gina Tognoni has plenty of support during this difficult time. We wish her the best in her future endeavors. Stay tuned to the CBS soap and don’t forget to check CDL often for the latest Young and the Restless spoilers, updates, and news.