The Young and the Restless Spoilers: Michelle Stafford Shocking Y&R Return – Gina Tognoni Phyllis Ends – Who Do You Prefer? 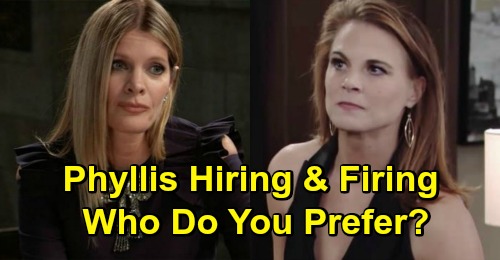 The Young and the Restless spoilers tease that early buzz about Michelle Stafford’s (Phyllis Summers) rehire, replacing Gina Tognoni who has been let go, has been strong and will grow stronger. All appreciative and therefore fair-minded Y&R fans know that Gina Tognoni’s (Phyllis) run as this character can be valued within its own era, while simultaneously recognizing that Stafford’s edition of the character is steeped in deeper Genoa City history.

There is no evidence that Y&R was seeking to remove, or recast Phyllis because Tognoni was performing strongly. Stafford’s availability, due to her reported contract talk impasse with General Hospital, was the factor that allowed her return.

Stafford is the original Phyllis. The Young and the Restless under CBS Daytime’s authority made a business decision. It’s as simple as that.

One doesn’t need to be an old school fan to know, or have seen, Stafford’s exit from the cast in 2013, when Phyllis got into a fight with Sharon (Sharon Case), fell down a flight of stairs and entered into a coma. When she awoke, Tognoni was the recast. As was also true of Sandra Nelson (Phyllis), Tognoni became an alternate edition of the character.

Even devoted Y&R viewers might not recall many details about Nelson because Stafford’s light shined brightly in 1997, as she earned her first Daytime Emmy Award. She followed with another in 2004.

Hardcore memories of Stafford’s efforts are rooted in the compelling arc that introduced this unique alter ego. Phyllis originally was an obsessed fan of Danny’s (Michael Damian), which established Christine (Lauralee Bell) as her all-time nemesis. A later event, where Phyllis purposely ran down Chris and Paul (Doug Davidson), became another unpunished crime.

Tognoni has appeared in nearly 500 episodes, since debuting in 2014. After awaking from the coma, she miraculously thumbed her way to Genoa City in a partial homage sequence connecting to Y&R’s first episode. Then, she stopped Shick’s attempted remarriage by bursting through the church doors in that resplendent white dress, which smartly sparked Tognoni’s start.

Peter Bergman (Jack) was superb as Marco in 2015. His dual role enabled Tognoni to also be spotlighted, as Phyllis was heinously compromised by Victor (Eric Braeden). That particular storyline can be placed with Tognoni’s most dynamic efforts, as it served to turn Phyllis in a different direction, as intended.

Phack was shattered, which directly led to Philly. Stafford’s version of Phyllis and Billy (in all his forms and in considering earlier SORAS’ing) would never have been interested in each other. But Tognoni and Jason Thompson had chemistry, which made Philly plausible within its time band.

As is often true in the escapist world of daytime drama, some actor’s portrayals of some characters stand alone. Stafford developed a person in Danny’s backstory into a legacy character, which forever affirms the actor’s greatness. With a known history, the electricity powering Stafford’s rehire isn’t a surprise.

Who would you prefer in the role of Phyllis: Gina Tognoni or Michelle Stafford? CDL is a leading source for everything linked to The Young and the Restless. Check back regularly for Y&R spoilers and news!