BY Heather Hughes on March 31, 2019 | Comments: one comment
Related : Soap Opera, Spoiler, Television, The Young and the Restless 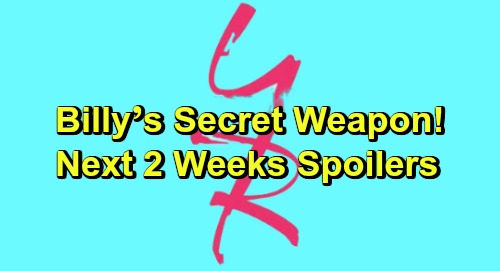 The Young and the Restless (Y&R) spoilers for the next two weeks tease that we’ll see stunning situations. During the week of April 1-5, Ashley Abbott (Eileen Davidson) will play hardball to get what she wants. After Jack Abbott (Peter Bergman) refuses to accept the terms of Ashley’s takeover deal, he’ll be forced to dig Jabot out of a deep hole.

Jack, Billy Abbott (Jason Thompson), Kyle Abbott (Michael Mealor) and Summer Abbott (Hunter King) will all contribute during a strategy session. Summer and Kyle’s social media push will prove helpful to the company, but Billy will think there’s one more person who could boost their pitch. He’ll get in touch with Rebekah Barlow (Jennifer Taylor) and hope she can assist them on this.

The Young and the Restless spoilers say Rebekah will indeed make her way to Genoa City. She’ll run into Nick Newman (Joshua Morrow) while she’s in town, so sparks will fly. Rebekah was once duped by Phyllis Summers (Gina Tognoni but soon to be Michelle Stafford) into thinking Nick was interested. Now it looks like single Nick will be interested for real, so stay tuned for some hot scenes.

Speaking of hot scenes, Rey Rosales (Jordi Vilasuso) and Sharon Newman’s (Sharon Case) first date will end in bed together. They won’t be disappointed when they finally make love. It seems it’ll be everything they hoped it would be, but Mia Rosales’ (Noemi Gonzalez) secret pregnancy has to come out sooner or later.

Meanwhile, Tessa Porter (Cait Fairbanks) will get back to songwriting like Mariah Copeland (Camryn Grimes) suggested. She’ll be a bit rusty at first, but Mariah will give her a pep talk and make some musical magic happen. Back with Summer, she’ll face doubts about her new marriage after Phyllis plants them there. Summer will convince Kyle to delete Lola Rosales (Sasha Calle) from his contact list to avoid temptation.

In Las Vegas, Victoria Newman (Amelia Heinle) will party with a band member named Brandon (Mitch Eakins). Her selfies and wild behavior won’t go over well with Billy, so he’ll confront her when she gets home. The Young and the Restless spoilers say they’ll have a serious discussion about Victoria’s issues, which will lead to some flying sparks during the week of April 8-12.

Over with Jack and Lauren Baldwin (Tracey E. Bregman), a war will heat up. Lauren will put a lot on the line to protect Fenmore’s. Y&R fans can expect Jack to be outwitted, so Lauren may be the one who gets sneaky.

Next, Paul Williams (Doug Davidson) will be feeling generous. Now that he’s cooled off, he’ll be willing to give Rey another chance. It could come with a few conditions, but it sounds like Rey may get back to work at the GCPD soon.

Finally, The Young and the Restless spoilers say Sharon will spar with Mia. This will most likely be after the pregnancy revelation. Mia’s baby may not even be real – and if it is, it may not be Rey’s. Sharon will think Mia’s bluffing one way or the other, so that should cause quite a confrontation.

The next two weeks will be packed with plenty of drama. We’ll give you updates as other Y&R news comes in. Stick the CBS soap and don’t forget to check CDL often for the latest Young and the Restless spoilers, updates and news.