The Young and the Restless Spoilers: Mia Pregnancy Bomb for Sharon – Rey Wrestles with Secret, Breaks The News 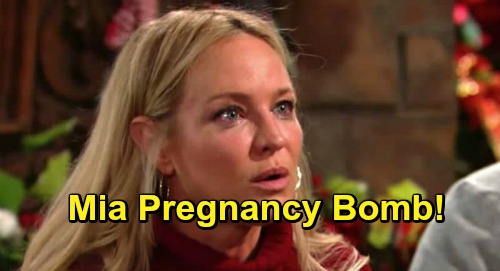 The Young and the Restless (Y&R) spoilers tease that Rey Rosales (Jordi Vilasuso) will keep a secret from Sharon Newman (Sharon Case). It’s not that Rey will want to deceive Sharon exactly. He’ll just be wary of rocking the boat so early in their relationship. Rey finally has his shot with Sharon, so he intends to take full advantage of it.

Rey also won’t want to spoil their delightful date. He’s got a bomb to drop, but it just won’t be the right time. Of course, we’re talking about the fact that Mia Rosales (Noemi Gonzalez) could be pregnant with Rey’s child. Rey will choose to keep his mouth shut for now and make love to Sharon, but that baby drama will have to come into play eventually.

Whether Rey’s having a kid with Mia or not, there’s nothing to stop Sharon and Rey from building a future together. Still, The Young and the Restless spoilers say this revelation could bring complications they’ll need to address. In the new issue of Soap Opera Digest, Jordi Vilasuso talked about what Rey will be feeling as he wrestles with this secret.

“Sharon and Rey have had so much drama in their lives, so he doesn’t want to ruin their night over a baby that might not even be his,” Vilasuso said. Since Mia also hooked up with Arturo Rosales (Jason Canela), there’s a chance this is his bun in the oven. There’s even a chance there’s no bun at all since Mia seemingly paid a pregnant woman for urine.

Y&R is keeping fans guessing about this baby’s paternity and existence, so it’s nice to have some mysterious elements in this storyline. Nevertheless, Rey will be a little concerned about how Sharon’s going to take this. “Sharon is definitely who he wants, but he’s still worried about how she will react to his news,” Vilasuso admitted.

When the time comes for her to face this shocker, Sharon should be thrown for a loop. However, it would be extremely out of character if it was a deal-breaker. Sharon knows how much Rey wants to be a dad. She also knows that Rey wants nothing to do with Mia – and who could blame him after she cheated on him with his brother multiple times? Why let a baby stand in the way of “Shey”?

No matter how Sharon reacts, it’s doubtful it’ll be a long-term issue. Mia is likely either faking or carrying Arturo’s child, so Rey probably won’t have to worry for long. Word has it Mia may be on her way out of town soon, which means they won’t have her stick around and raise a kid with Rey.

It sounds like Mia will ultimately be out of Rey and Sharon’s lives for good. The Young and the Restless spoilers hint that some exciting scenes are ahead, so don’t miss them. We’ll give you updates as other Y&R details emerge. Stay tuned to the CBS soap and don’t forget to check CDL often for the latest Young and the Restless spoilers, updates and news.