BY Heather Hughes on March 27, 2019 | Comments: one comment
Related : Soap Opera, Spoiler, Television, The Young and the Restless 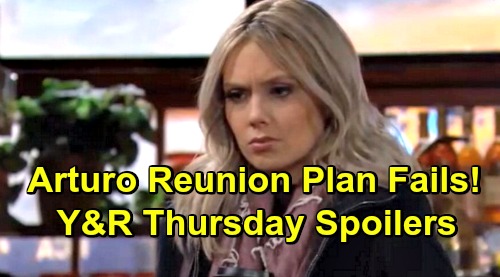 The Young and the Restless (Y&R) spoilers for Thursday, March 28, tease that Arturo Rosales (Jason Canela) will make a bold move. Abby Newman (Melissa Ordway) was furious over Arturo’s cheating confession, so she promptly dumped him and damaged as much of his truck as possible. That helped her express at least some of her rage, but she’s still got plenty more.

Nevertheless, Arturo will hope Abby’s cooled down enough to listen to him. He’ll plan a huge surprise in hopes of winning Abby back, so Y&R fans can expect a grand gesture. Of course, we all know Arturo’s efforts will fail miserably. Abby clearly isn’t going to just forgive and forget this deep betrayal, so she’ll chew Arturo out again and insist that they’re over for good.

Other Young and the Restless spoilers say Cane Ashby (Daniel Goddard) will grapple with the harsh reality of a situation. He seriously screwed up by kissing Victoria Newman (Amelia Heinle) and getting caught by Billy Abbott (Jason Thompson). That put Billy in the position to blab, so Lily Ashby’s (Christel Khalil) suffering intensified.

Lily was already living a nightmare behind bars, but Cane’s actions undoubtedly made her feel completely alone. She can’t count on Cane to be faithful on the outside, so she may keep shutting her husband out. In fact, Lily might decide Cane shouldn’t even be her husband anymore. Will Cane face divorce papers soon? Will he realize he’s lost Lily and caused the end of his marriage?

Regardless, The Young and the Restless spoilers say Cane will be down in the dumps. He’ll have a hard time dealing with the blows that keep coming, but he’s only got himself to blame. Over at Jabot, Jack Abbott (Peter Bergman) won’t be able to ignore his suspicions any longer. It looks like Kerry Johnson (Alice Hunter) will slip up, but it doesn’t really matter now. Kerry and her secret boss have apparently pulled off a major victory.

Ashley Abbott (Eileen Davidson) will be part of the big reveal this Friday, March 29, so it seems likely that she’s Kerry’s partner in crime. Thursday may bring the final pieces of this twisted scheme, which means the shocker will be ready to roll! We’ll give you updates as other Y&R news emerges. Stick with the CBS soap and don’t forget to check CDL often for the latest Young and the Restless spoilers, updates, and news.