BY Marcy Cohen on June 27, 2018 | Comments: one comment
Related : Soap Opera, Spoiler, Television, The Young and the Restless 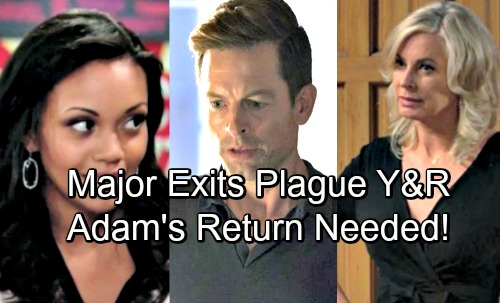 The Young and the Restless (Y&R) spoilers tease that the CBS soap may be in trouble. Ratings have already been faltering a bit lately. Some fans are on board with the direction the show’s headed in, but others are starting to tune out.

Y&R obviously isn’t in danger of cancellation, but they’d undoubtedly like to give things a boost. They normally have a sizable lead in the soap ratings race, so they want to make sure they keep it. Sadly, two huge exits are adding to the show’s list of problems. Mishael Morgan will soon wrap up her run as Hilary and now reliable sources report Eileen Davidson’s (Ashley) out, too.

Sony’s been refusing to give out raises, so there’s nothing to stop popular Y&R stars from walking. Hilary’s responsible for so much drama in Genoa City, so she’s a major loss. Love her or hate her, she’s played an important role in many stories over the past few years.

Of course, Ashley is also a fan favorite and a GC staple. Her departure will bring a tough loss for The Young and the Restless. Y&R’s losing momentum, so they need to turn this situation around. They’ll have to make a big splash in the coming months if they want to generate buzz again.

Fortunately, there’s an easy way to make that happen. All they have to do is bring back Adam Newman! If they’re looking for a popular character, they should look no further than Adam. He’s perhaps the most beloved member of the Newman clan.

Adam straddles that line of good and evil so perfectly. He can be sweet and sensitive, but he’s got that dangerous and cutthroat side as well. Whether Y&R goes for a recast or brings back Michael Muhney, most viewers would be pleased. Adam is definitely needed on canvas in some form – maybe now more than ever!