The Young and the Restless Spoilers: Billy vs Brandon Rivalry for Victoria’s Heart Heats Up – Hot Y&R Love Triangle Brewing? 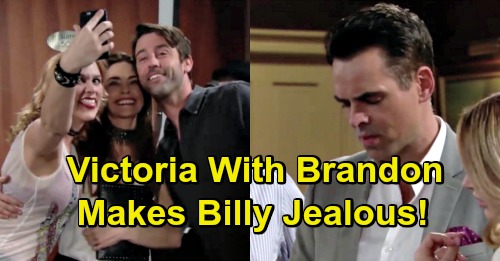 The Young and the Restless (Y&R) spoilers tease that Victoria Newman (Amelia Heinle) will need to feel disconnected for a while. She’s been through so much in Genoa City, so she associates it with pain right now. After all the J.T. Hellstrom (Thad Luckinbill) drama, Victoria could use a break from reality and all the horror she endured.

Nikki Newman (Melody Thomas Scott) will fret when she finds her daughter scrambling to pack a suitcase. Victoria will claim she’s going on a business trip, but Nikki will doubt her claims. She’ll call Victoria out on trying to run from her apparent PTSD as well as Billy Abbott (Jason Thompson).

However, Victoria won’t see it like that. She’ll think this trip is deserved and necessary. It isn’t the best idea for Victoria to be around the kids if she’s spiraling, so this is probably the right call. Nikki may not like it, but going a bit wild could be good for Victoria in some ways. There’s no better place to do that than Las Vegas, so that’s exactly where Victoria will head off to.

The Newman trial was quite public and brought a major scandal to the family name. That’s why Victoria will use the name Jeni Lambertson when she checks in her posh hotel suite. Victoria will even take on a new personality for this trip. She’ll want to be a completely different person – if only for a little while.

A knock at the door will catch Victoria off guard later. It’ll be a slightly drunk band member named Brandon (Mitch Eakins). He’ll have the wrong room number, but he’ll slip a flyer under her door anyway. Once Victoria sees how handsome Brandon is, she’ll be more open to meeting him. Victoria will let Brandon in her room, where they’ll form an interesting connection.

Brandon may be the anti-Billy to Victoria. He’s this hot rocker who won’t pressure her and likes to have fun. Victoria will be looking for something easy and breezy in this moment, so Brandon will be just what she needs. Nevertheless, Victoria can’t stay in this new reality forever. She’ll actually discover something thanks to Brandon, and it’ll send her down a mysterious path.

Once Victoria returns to GC, Billy will undoubtedly wonder what she was thinking. He’ll confront Victoria about ignoring his texts and calls as well as her crazy selfies from Vegas. Billy may be jealous over Brandon and whatever was going on between them. He just won’t understand why Victoria is shutting him out and turning to a stranger instead.

Billy will push Victoria to let him be there for her. The Young and the Restless spoilers say she’ll cave in during the week of April 8-12 when things heat up between the exes. Of course, Brandon could always reenter the picture at some point. Will he figure out who Victoria really is and track her down in Genoa City?

Perhaps Brandon’s band could even have something going on with Devon Hamilton’s (Bryton James) label. Brandon might run into Victoria again by chance and make this a full-fledged Y&R love triangle. Regardless, Billy may have some work to do if he wants to truly win Victoria’s heart!