BY Heather Hughes on March 29, 2019 | Comments: one comment
Related : Soap Opera, Spoiler, Television, The Young and the Restless 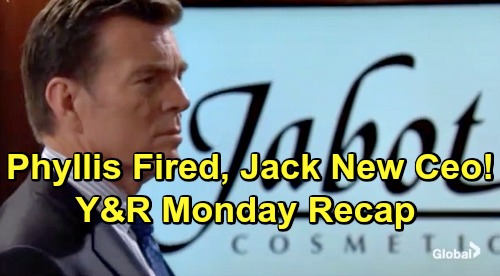 The Young and the Restless (Y&R) spoilers for Monday, April 1, tease that Ashley Abbott (Eileen Davidson) will thank Kerry Johnson (Alice Hunter) for a job well done. She’ll tell Kerry, who’s British and really is named Dominique Caroll, to have safe travels. Jack will follow Kerry aka Dominique out into the hall to confront her about their relationship. She’ll insist her feelings are genuine and ask Jack to return to Paris with her.

Jack will turn down that proposal, so Dominique will wish him luck going to war with his sister. Meanwhile, Ashley will face complaints in the boardroom. Billy Abbott (Jason Thompson) and Traci Abbott (Beth Maitland) will rant until Jack walks in along with Kyle Abbott (Michael Mealor) and Abby Newman (Melissa Ordway).

After Abby and Kyle learn what Ashley’s been up to, she’ll explain that the real Kerry works for her at My Beauty. The others will get confirmation that Ashley is also the owner of Premiere Cosmetics, which is the company that secured all the patents. Ashley will want to take over Jabot, so she’ll make her offer. If they want the products Dominique developed back, they’ll accept it by tomorrow.

Next, the Abbotts will gang up on Phyllis Summers (Gina Tognoni) for letting this happen. Since didn’t force Kerry to sign a non-compete clause, so Phyllis is voted out as CEO. Jack will contend that they can’t just cave in to Ashley’s demands. He’ll want to fight for Jabot’s future, so he’ll ask to be put back on the throne. 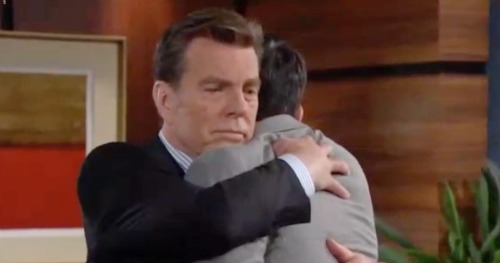 Later, the board members put it to a vote. Abby will decide to abstain since this is all pretty complicated for her. That’ll leave Billy to make the deciding vote. He’ll give his brother his support, so Jack will officially become Jabot’s new CEO. Back with Ashley, she’ll bump into Dominique at the athletic club bar. After assuring Phyllis that their friendship is real, Dominique will suggest Phyllis can bounce back from this.

Over with Rey Rosales (Jordi Vilasuso) and Sharon Newman (Sharon Case), they’ll arrive at the club for their date. Rey will have flowers and a card for Sharon, which she’ll appreciate. They’ll drink Champagne and discuss whether Rey’s ready to move on after what happened with Mia Rosales (Noemi Gonzalez). Rey will think he’d be a fool to wait any longer to kiss Sharon.

Afterward, Sharon and Rey will make love in a suite. The Young and the Restless spoilers say “Shey” will definitely get steamy! In another hotel room, Abby will blast Ashley over her secret plan. It’s clear that Abby won’t be happy with her mother’s choices.

At the ranch, Nikki Newman (Melody Thomas Scott) will get a visit from Paul Williams (Doug Davidson). He’ll embrace Nikki and let her open up about Victoria Newman (Amelia Heinle). She’ll be concerned about everything her daughter still has to deal with.

At Victoria’s place, she’ll tell the kids she has to go on another business trip, but she’ll promise it’ll be a short one. Soon after, Victoria will give Nikki the same bogus story. Nikki won’t voice her displeasure, but Vickie will stick to her plan. She’ll urge Nikki to fill Billy in for her.

A little later, Nikki will grant the request and express concern to Billy as well. She’ll feel like Victoria is using this trip to run away from her problems. At a hotel in Las Vegas, Victoria will check in under the name Jeni Lambertson and ask not to be disturbed. Y&R fans can expect things to get interesting during her stay there!