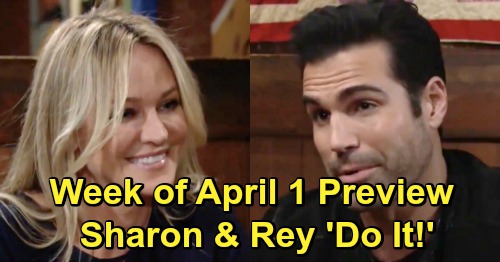 The Young and the Restless (Y&R) spoilers for the week of April 1 through April 5 tease that Rey Rosales (Jordi Vilasuso) will be the perfect gentleman. He’ll take Sharon Newman (Sharon Case) out on a proper date, so expect their chemistry to sizzle all night long. Rey and Sharon will head to the athletic club for this special occasion. They’ll spend some time talking as Rey wines and dines his love. He’ll hope he can really sweep Sharon off her feet.

Thankfully, there won’t be any major snags on their date night next week, April 1-5. Sharon and Rey will both be a little nervous despite all the months they spent getting to know each other, but that’s to be expected. They’re finally on the same page about moving forward together – hopefully as a real couple if all goes well.

Rey has assured Sharon that she’s the only woman she wants. Sharon’s also been cleared of the harsh charges against her, so there’s nothing to stop their love story. Y&R spoilers say this date will be a huge success, so Rey and Sharon will feel good about where things are headed. They’ll hope this is the beginning of a relationship that’ll last.

After a magical night together, Rey will take Sharon home and let her know he’d like to do this again sometime. However, neither one of them will want the fun to end. The sexual tension’s been building for quite a while now, so Sharon and Rey will decide to just go for it. They’ll be ready to take their romance to the next level with a steamy sex session.

The Young and the Restless spoilers state that a passionate kiss will lead to stripping down. Rey and Sharon just won’t be able to resist each other any longer. Needless to say, this portion of the evening will also be a hit. “Shey” supporters will definitely be on cloud nine by the end of these hot scenes.

Later, Sharon and Rey may do some post-sex cuddling as they appreciate how far they’ve come. They both made some mistakes along the way, but they’ve got a true chance at happiness now. Mia Rosales (Noemi Gonzalez) might make some last-ditch efforts to cause drama, but let’s hope Sharon and Rey’s love can stay strong!