The Young and the Restless Spoilers: Friday, March 29 – Ashley Returns with Shocking Revelations – Kerry Goes Out with a Bang

BY Heather Hughes on March 28, 2019 | Comments: one comment
Related : Soap Opera, Spoiler, Television, The Young and the Restless 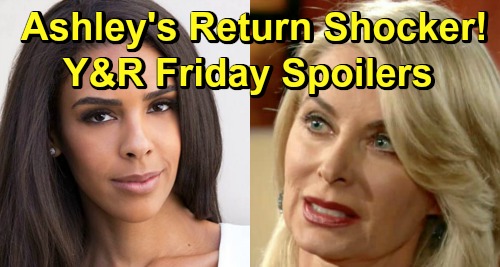 The Young and the Restless (Y&R) spoilers for Friday, March 29, tease that a long-awaited comeback will finally arrive. Y&R fans have been eager to see Ashley Abbott’s (Eileen Davidson) return to Genoa City, so Friday’s scenes will definitely bring some fun drama. Ashley has been off in Paris trying to make her new company, My Beauty, a huge success. It looks that goal will bring her home as well.

Kerry Johnson (Alice Hunter) has been scheming against both Jack Abbott (Peter Bergman) and Phyllis Summers (Gina Tognoni), but they’ve been fighting their suspicions. Jack has truly fallen for Kerry, so he doesn’t want to believe she could betray him. Even Phyllis is trying to hold on to that last bit of trust. Kerry is Phyllis’ only friend, so it’s a big deal that she’s been plotting all along.

However, another clue about Dominique Caroll will surface on Friday. Phyllis might do some digging to verify Kerry’s story about this puzzling intern. She might determine that there’s not really a Dominique at all. Likewise, Jack will discover something that leads him to believe Kerry has been lying. The Young and the Restless spoilers say all the hints will build to one big reveal explosion.

Kerry has been keeping in touch with a mysterious boss and the timing seemingly confirms who it is. Since Kerry’s drama is blowing up right as Ashley comes back, it sounds like Ashley played dirty to get what she wanted. She wasn’t on the greatest terms with her family when she left town, although she did somewhat make peace with Jack before she left.

Nevertheless, it seems there wasn’t enough peace to stop Ashley’s sneaky plan. She apparently didn’t care if Phyllis paid the price either. When you’re trying to get a new company off the ground, you’re going to have to make some cutthroat decisions. Ashley likely chose to get ruthless for the sake of My Beauty and recruited Kerry as her secret weapon.

Ashley is only around for a two-day stint, so this storyline should take up a good chunk of airtime over the next couple episodes. The Young and the Restless will want to do Ashley’s return right and send Kerry out with a bang! We’ll give you updates as other Y&R news comes in. Stick with the CBS soap and don’t forget to check CDL often for the latest Young and the Restless spoilers, updates, and news.