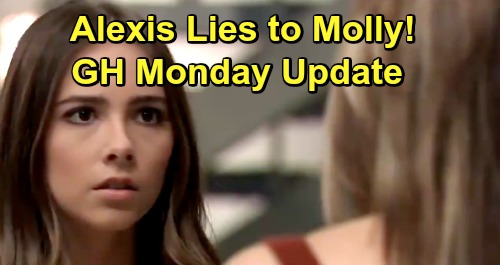 General Hospital (GH) spoilers update for Monday, April 22, tease that Shiloh Archer (Coby Ryan McLaughlin) will waltz over to infuriate Jason Morgan (Steve Burton) at the boxing gym. Thankfully, Jason will be able to pummel the punching bag instead of beating Shiloh to a pulp. Still, it won’t be easy to control his rage when Shiloh talks about trusting Sam McCall (Kelly Monaco) and growing closer to her.

Speaking of trust, there won’t be much left between Molly Lansing-Davis (Haley Pullos) and Alexis Davis (Nancy Lee Grahn) – at least when it comes to Kristina Corinthos-Davis’ (Lexi Ainsworth) whereabouts. As T.J. Ashford (Tajh Bellow) stands beside Molly, Alexis will admit she hasn’t been totally honest. Unfortunately, she won’t be totally honest on Monday either.

General Hospital spoilers say Alexis will try to throw Molly off the trail. She’ll insist that Kristina needed to clear her head, so she left town on her own. Molly won’t be sure she buys that, so she’ll contact the police soon enough. At the community house, Sam will get interrogated about what she’s up to. She’ll tackle some questions while Shiloh’s busy elsewhere, so there’ll still be plenty of drama.

At the safe house, Alexis and Sonny Corinthos (Maurice Benard) will hold a mini intervention for Kristina. Michael Corinthos (Chad Duell) will also show up and encourage Kristina to come home with him. He’ll insist that they have plenty of room, but Kristina won’t think it’s that simple. She’ll allude to the promise she made and refuse to turn her back on Dawn of Day, especially Shiloh.

Sonny will push Kristina to admit whatever Shiloh’s holding over her, but she may not want to divulge that. There could certainly be some fear and shame on Kristina’s part. At the same time, Kristina wants to believe Shiloh’s one of the good guys. She’ll speak with Dr. Neil Byrne (Joe Flanigan) privately and gripe about how no one’s listening to her. Kristina will feel like she deserves to be set free.

Back with Sonny, he’ll resolve to keep Kristina’s pledge from going public. Sonny may still assume it’s about him, but Kristina actually ratted out Alexis for murdering Kiefer Bauer (Christian Alexander). Regardless, Sonny will refuse to let Shiloh destroy anyone he cares about. GH spoilers say he’ll fill Sam and Carly Corinthos (Laura Wright) in on how he plans to keep things quiet.

Next, Scott Baldwin (Kin Shriner) will object to Ava Jerome’s (Maura West) strategy. He’ll think her fake boyfriend plot is far too risky, so he definitely won’t be participating. Ava will turn to Dr. Kevin Collins (Jon Lindstrom) at some point, which will lead to a difficult decision. It won’t exactly be something Kevin wants to do, but he’ll feel like he must after Laura Webber (Genie Francis) votes yes.

Until then, Laura will look disgusted by the contents of Ryan Chamberlain’s (Jon Lindstrom) package. It seems likely that Ryan’s detached hand will gross her out. On a lighter note, Michael and Sasha Gilmore (Sofia Mattsson) will be ecstatic about that hookup they just had. They should be truly smitten, so Carly will want to get to know Sasha after she bumps into her on Monday.