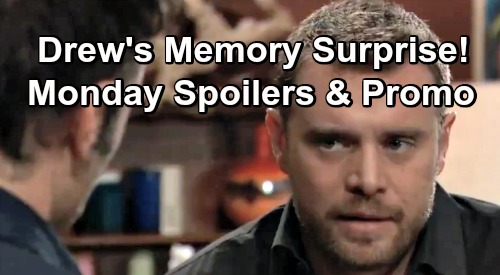 General Hospital (GH) spoilers for Monday, February 11, tease that Alexis Davis (Nancy Lee Grahn) will face a dilemma. She just spent some time confiding in Neil (Joe Flanigan) at Charlie’s Pub, but it turns out he’s the therapist “Dr. Kevin Collins” aka Ryan Chamberlain (Jon Lindstrom) recommended. Alexis will wonder what they do now, but Neil may not see the problem.

After all, that chat was basically like their first therapy session. Neil may argue that they just got a little head start, so Alexis will decide she’s in. Once Neil offers some great guidance, Alexis will choose to make another appointment. She’ll think Neil’s advice could actually be good for her as she tries to move on from Julian Jerome (William deVry).

Other General Hospital spoilers say Ryan will prepare to kill Dr. Griffin Munro (Matt Cohen). He just lured Griffin up to the roof and pulled out a syringe when the unsuspecting doc’s back was turned. Fortunately, Ava Jerome (Maura West) will show up to save the day. Ryan will manage to hide what he’s doing, so he’ll get away with this almost crime and avoid stirring up more trouble for himself.

Of course, Ryan could grow concerned when Ava suggests she knows what he’s been up to. He’ll flash an evil glare, but Ava was actually looking for “Kevin” to apologize. She’s starting to see things from his perspective, so Ryan will be thrilled once they make up.

Meanwhile, Griffin will unknowingly escape death and head home. Sasha Gilmore (Sofia Mattsson) will surprise him when she arrives and offers sympathy. She’ll want to know how Griffin’s holding up after Kiki Jerome’s (Hayley Erin) brutal murder. Griffin will end up snapping at Sasha over her topic choice. He’ll insist that he’s sick and tired of everyone talking to him about Kiki.

Sasha may contend that they can discuss something else instead. She’ll just want to be a friend to Griffin, so we’ll see if he’s willing to let her. Over with Jason Morgan (Steve Burton), he’ll take a little trip.

GH spoilers say Jason will meet Harmony (Inga Cadranel) at the Beechers Corners chapter of DOD. He’ll manage to pry some intriguing information out of her, so he’ll hope he can use it to his advantage.

Shiloh Archer (Coby Ryan McLaughlin) is one slippery character, but Jason and Sam McCall (Kelly Monaco) will keep up their efforts to bring him down. Drew Cain (Billy Miller) will also have a conversation with Shiloh on Monday’s new GH episode, February 11.

During their meeting, Shiloh will wonder if there’s any chance Drew will get his memories back. It sounds like maybe there’s something Shiloh doesn’t want Drew to remember!

General Hospital spoilers say Carly Corinthos (Laura Wright) will lash out at Sam on Monday, but Sam will ease the tension. Carly may not be happy that they’re pumping the brakes on a full “JaSam” reunion, but she at least knows they’re together behind closed doors. Sam may promise Carly that this is just a minor obstacle. She’ll feel confident that Shiloh will get a taste of his own manipulative medicine.

It sounds like Monday’s episode will deliver plenty of excitement. We’ll give you updates as other GH news comes in. Stay tuned to the ABC soap and don’t forget to check CDL often for the latest General Hospital spoilers, updates and news.