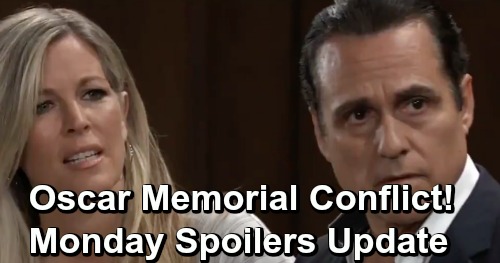 General Hospital (GH) spoilers for Monday, May 13, tease that Alexis Davis (Nancy Lee Grahn) will reach out to Julian Jerome (William deVry). She’ll point out that Julian didn’t have to do what he did, but she’ll be grateful for it anyway. They’ll probably have a chat about Kristina Corinthos-Davis (Lexi Ainsworth) and her return to work. Kristina really needs the stability of this job right now, so Alexis will be appreciative.

Meanwhile, Cameron Webber (William Lipton) will pick up trash as part of his community service requirement. When Franco Baldwin (Roger Howarth) realizes Cam’s now off the clock, he’ll push the teen to go grab a burger with him. Franco will hope he can ease the tension and perhaps bond with Cameron, but Cam will think this is all an act for Elizabeth Webber (Rebecca Herbst) and his brothers.

Franco will make a speech about how he’s not doing this for Cameron’s mom, although he loves her completely. He’ll make it clear that this is for himself. Franco will truly want to get past the point of toleration and start earning Cameron’s respect. He’ll refuse to give up hope that it’ll happen one day.

Of course, Cameron’s mood might be affected by the difficult day. Monday’s GH episode will bring Oscar Nero’s (Garren Stitt) unconventional memorial service. General Hospital spoilers say Cameron will step up somehow, so maybe it’ll involve supporting Josslyn Jacks (Eden McCoy) in some way. She’ll get quite emotional as she tells her family she doesn’t feel like she’s ready to do this.

Jasper “Jax” Jacks (Ingo Rademacher), Sonny Corinthos (Maurice Benard) and Carly Corinthos (Laura Wright) will also help Joss as she tries to prepare herself. Saying goodbye is never easy, but Oscar left behind some plans to make the day filled with positivity. It was his hope that it would be a time to celebrate his life, not dwell on his death.

That’s why Ned Quartermaine (Wally Kurth) will reassure Drew Cain (Billy Miller) and Dr. Kim Nero (Tamara Braun), who’ll be unsure of how to celebrate when their son left them far too soon. Ned will contend that they don’t have to figure it out; Oscar already did it for them. He’ll explain the orders he was given and spell out Oscar’s plan for this bittersweet occasion.

This will still bring a rough time for Kim and Drew, but knowing it’s what Oscar wanted will help. Over with Sonny, he’ll disagree with something Ned does on Monday. Since Ned will be running this Oscar show, maybe there’ll be some conflict over that. Ned may urge Joss to do something that’s hard on her, which Sonny obviously wouldn’t approve of.

Fortunately, everything should be worked out sooner or later. At some point, Sam McCall (Kelly Monaco) will express surprise to Jason Morgan (Steve Burton). She’ll wonder if he knew about some big news. Michael Corinthos (Chad Duell) will be on hand for this conversation, too. It seems it may be about Oscar’s memorial service – or more specifically, the video message the teen provided.