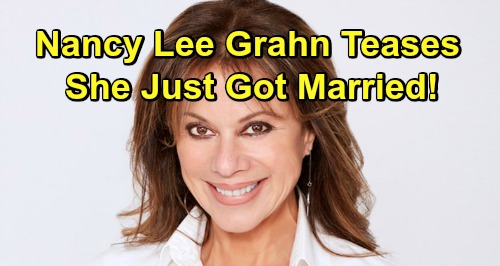 General Hospital (GH) spoilers has some news to pass on about a popular GH star. Nancy Lee Grahn, who portrays Alexis Davis on the ABC soap, recently posted a photo on Instagram that has her fans buzzing and a lot of speculation going on about her current relationship status.

Of course, on General Hospital, Alexis hasn’t been very lucky in love. She is currently suffering a great deal of angst over her prior relationship with Julian Jerome (William deVry), to the point where she’s seeing a therapist for assistance on the situation.

But concerning Nancy herself…she posted a photograph of a gold glittery sign saying “happily ever after” in cursive lettering on her Instagram feed, and it looks like something that could easily have been part of a wedding ceremony or engagement party. Nancy’s caption for the photograph reads: “It’s a little charred after briefly catching on fire but that’s what makes it honest.”

Nancy’s post has led many of her followers to assume that she either got married or engaged and a party/celebration ensued, at which the sign was used. Her followers have been commenting on her post right and left, with one saying: “Nancy, do tell. Engaged?” And another commented: “OMG you got married? Congratulations!”

But as of this writing, Nancy hasn’t confirmed or denied anything on either her Instagram or Twitter feeds. Nancy is very active on social media and shares a lot of what’s going on in her life, so we’ll probably see an update soon. She’s recently mentioned having a man in her life, so you can see why fans are excited.

Nancy’s latest social media posts indicate that she celebrated Easter with her family, but so far there have been no additional posts about her possible nuptials or engagement.

What do you think? Will we soon be wishing Nancy a big congratulations? Stay tuned to the ABC soap and don’t forget to check CDL often for the latest General Hospital spoilers, updates, and news.

It’s a little charred after briefly catching on fire but that’s what makes it honest.