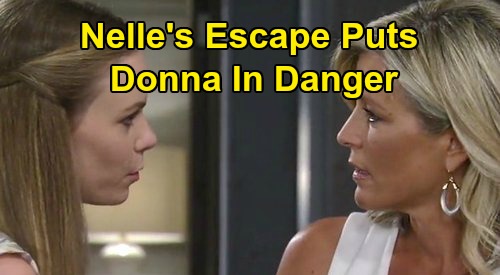 General Hospital (GH) spoilers tease that Nelle Benson (Chloe Lanier) is remaining hopeful about her upcoming parole hearing. As GH viewers know, she recently met with a lawyer, Martin Gray (Michael E. Knight), about her chances of parole. Martin agreed to take her case, and Nelle was thrilled about the prospect, as she thinks she has a decent shot of convincing the parole board to let her go free.

And even if she doesn’t get granted parole, there’s always the possibility that Nelle will escape from prison. GH buzz is that she and Ryan Chamberlain (Jon Lindstrom) could orchestrate an escape. Whether that will ever materialize remains to be seen, but certainly if Nelle is denied parole, she’s going to want to do something to become a free woman.

Of course, Nelle doesn’t want to go free just for kicks – she’s got a serious vendetta against some key Port Charles residents. As she recently explained to Shiloh Archer (Coby Ryan McLaughlin), she feels that the Quartermaines owe her big time. Plus, there’s the issue of her son, Jonah Corinthos, who is currently believed by others to be Wiley Cooper-Jones (Theo and Erik Olson). General Hospital spoilers say Nelle is hoping for an eventual reunion with Jonah in some fashion, and that could spell big trouble for Brad Cooper (Parry Shen) and Lucas Jones (Ryan Carnes).

But something tells us that Nelle won’t make the big Jonah/Wiley reveal right away, especially since she’s got unfinished business with the Quartemaines, and even with Carly Corinthos (Laura Wright). After all, Nelle still blames Carly for much of her problems, and there is certainly plenty of animosity left between Carly and Nelle. Might Nelle be planning something nefarious for Carly upon her parole release or prison escape, whichever comes first?

If Nelle does plot something against Carly, then there’s a horrible possibility that could become a reality…Nelle could decide to get to Carly by messing with her new baby, Donna Corinthos (Ella and Emma Hulen). Right now, it’s unclear whether Nelle even knows about Donna’s existence, but surely if she were to find out, she’d find the situation terribly unfair. After all, in her mind she’s been separated from Jonah due to Carly and the Quartermaines, and now Carly gets to play mom to her baby.

Something tells us that Nelle would be seriously put off by that. Might she decide to do something drastic, like kidnap Donna to make Carly suffer? She’d in turn make Michael Cornithos (Chad Duell) also suffer the loss of his baby sister, which would be a plus in Nelle’s warped mind. We could see Nelle on the run with Carly’s baby, leaving Carly and Michael totally devastated.

Time will tell whether this scenario will play out, but one thing’s for sure – Nelle isn’t done with Carly and the rest of the Quartermaines. She wants them to pay, and since she has a way of hitting where it hurts, we can probably expect some good drama to follow!

Do you think that Donna could be in danger from Nelle? Stay tuned to the ABC soap and don’t forget to check CDL often for the latest General Hospital spoilers, updates, and news.