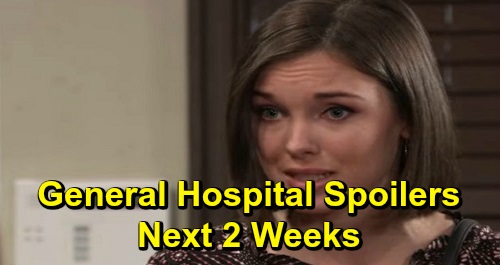 General Hospital (GH) spoilers for the next two weeks tease that some twists and turns are brewing. During the week of December 16-20, Elizabeth Baldwin (Rebecca Herbst) will be relieved when Franco Baldwin (Roger Howarth) opened his eyes. Once the procedure was finished, the reality of the situation really hit Liz. She admitted she could deal with whatever outcome as long as Franco woke up.

Of course, Liz will certainly be hoping that Franco’s back to his old self. Thankfully, it looks like Liz will get her wish. General Hospital spoilers say Franco will eventually face a crushing blow. He wouldn’t be crushed over remaining “Drew Cain,” but Franco would be crushed to learn about the real Drew Cain’s (Billy Miller) presumed death. That seems to be where this storyline is headed next.

Over with Ava Jerome (Maura West), she’ll open those gallery doors up for an exciting auction. It won’t be long until Valentin Cassadine (James Patrick Stuart) is fighting hard for the portrait, which supposedly contains the codicil. Jasper “Jax” Jacks (Ingo Rademacher) will get called away, so Laura Webber (Genie Francis) will go to war for him. She’ll shock Valentin with her six-figure bid, but Valentin won’t give up.

Laura will be willing to climb as high as half a million dollars – and it’ll briefly look like Valentin’s going to lose the painting he seeks. However, Valentin will pull off a win in the end. He’ll celebrate in a very public fashion before he receives a troubling phone call. Lulu Spencer (Emme Rylan) will feel powerless around this same time, so it sounds like Charlotte Cassadine (Scarlett Fernandez) will be in danger or some form of trouble.

As for Ava, she’ll await someone’s arrival. Perhaps Ava will suspect Nikolas Cassadine (Marcus Coloma), who could easily stage some incident with Charlotte to drag Valentin away without the portrait. If Nik shows up to steal it later, Ava will be waiting. Meanwhile, Anna Devane (Finola Hughes) will grow increasingly suspicious of Peter August (Wes Ramsey) while Maxie Jones (Kristen Storms) remains in the dark. Maxie will be oblivious to the shady side of Peter that’s still right under her nose.

During the week of December 23-27, holiday festivities will begin on GH. Danny Morgan (Porter Fasullo) could be a bit glum as he goes to see Santa. He’ll probably hope Santa can bring his mom home for Christmas – and that’s what Jason Morgan (Steve Burton) will be hoping for, too. Sam McCall’s (Kelly Monaco) release is all Jason wants for Christmas this year.

Next, Nelle Benson (Chloe Lanier) will refuse to back down. She’ll be persistent in her demand of something, which probably means her freedom. Like Sam, Nelle may be hoping she can be reunited with her family this Christmas – and by family, we mean “Wiley Cooper-Jones” (Erik and Theo Olson).

Meanwhile, Willow Tait (Katelyn MacMullen) will have an apology to pass along. It’s not clear what Willow will be sorry for, but it could serve as another building block toward the baby swap revelation. As for Lucas Jones (Ryan Carnes), will he get a Christmas miracle? Brad Cooper (Parry Shen) and all of Lucas’ loved ones are certainly counting on one.

Elsewhere, Harrison Chase (Josh Swickard) will open up to his brother. During Chase’s chat with Hamilton Finn (Michael Easton), they might discuss Willow’s pregnancy scare and her conversation with Chase about being parents one day. Since Finn recently learned he had a young daughter, Finn may share his experience with Violet Barnes (Jophielle Love) and assure Chase that fatherhood can be wonderful.

It sounds like some great scenes will play out over the next two weeks. We’ll give you updates as other GH news comes in. Stay tuned to the ABC soap and don’t forget to check CDL often for the latest General Hospital spoilers, updates and news.