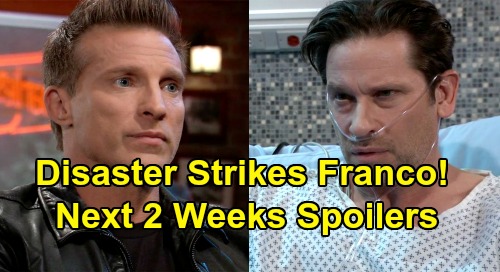 General Hospital (GH) spoilers for the next two weeks tease that some hot drama’s ahead. During the week of July 29-August 2, Nelle Benson’s (Chloe Lanier) confession plan will go away thanks to a tricky situation. A technological twist will result in a setback that either prevents Nelle’s truth-telling or gives her enough time for a change of heart.

Either way, Michael Corinthos (Chad Duell) will be left in the dark on his very much alive son, Jonah Corinthos. General Hospital spoilers say Michael will be unsettled after his meeting with Nelle, so Sasha Gilmore (Sofia Mattsson) will lend an ear. She’ll listen as Michael makes a confession of his own, which will likely involve many dirty little details of Nelle’s history.

Over with Lulu Falconeri (Emme Rylan), she’ll take a day to focus on herself. Lulu will try to find out what her new normal’s going to look like. Now that she’s accepted Dante Falconeri (Dominic Zamprogna) may never come back to her, she’ll have to find some way forward.

Other General Hospital spoilers say Shiloh Archer’s (Coby Ryan McLaughlin) arrogance will concern Jason Morgan (Steve Burton). Most people would be scared going up against charges like Shiloh’s going up against. The fact that Shiloh seems confident he’ll beat the charges will leave Jason worried about what’s in store given the DoD leader’s past treachery.

Meanwhile, Alexis Davis (Nancy Lee Grahn) and Neil Byrne (Joe Flanigan) will end up in a risky situation. Does that mean some danger will emerge? Could it involve their growing attraction instead? It’s clear that something’s happening between them, even if they want to ignore it. There’s a connection, so maybe Neil and Alexis will battle some temptation around each other.

During the week of August 5-9, General Hospital spoilers say Franco Baldwin (Roger Howarth) will be shocked and deeply disturbed. It’s possible Franco will learn the identity of the person who shoved Liesl Obrecht (Kathleen Gati) overboard. Then again, Franco could overhear something that tips him off to the truth about “Wiley Cooper-Jones.”

General Hospital spoilers say Elizabeth Baldwin (Rebecca Herbst) will get a horrifying phone call later. Will Liz learn Franco’s been in a car crash? It certainly sounds like it. If Franco learns a secret before this accident, a coma or amnesia seems like a good possibility.

Before Scott Baldwin (Kin Shriner) gets updates on Franco’s ordeal, he’ll be more focused on Ava. Scott will feel like Ava’s being duped, so he’ll probably warn her not to put too much faith in a psychic’s ramblings.

Over with Lucy Coe (Lynn Herring), she’ll be in the loop on more than she thinks. GH has inched her into Sasha’s storyline, so she could pick up a few clues and play a part the big reveal down the road.