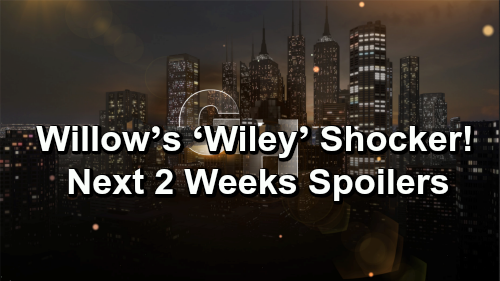 General Hospital (GH) spoilers for the next two weeks tease that some tough moments are on the way. During the week of January 14-18, Oscar Nero (Garren Stitt) will have to face the facts. Dr. Terry Randolph (Cassandra James) will be honest with her patient about how much time he’s got left. Oscar will take the news fairly well. Dr. Kim Nero (Tamara Braun), on the other hand, most certainly will not.

While Kim loses control of her emotions, Oscar and Josslyn Jacks (Eden McCoy) will plan their final adventures. It looks like Cameron Webber (William Lipton) will finally be brought up to speed, so he’ll help them out. General Hospital spoilers say Joss will express her gratitude to Cam. Their spark will remain, but Josslyn can’t pursue that yet. She’ll only be focused on Oscar during his last months.

Meanwhile, Mike Corbin’s (Max Gail) condition will decline rapidly. Sonny Corinthos (Maurice Benard) will be torn apart as Mike has his worst episode yet. Over with Jason Morgan (Steve Burton), he’ll get caught in some danger. A life-threatening situation will emerge, but Jason will step right up. He’s always the hero Port Charles needs, so look for Jason to save the day.

During the week of January 21-25, General Hospital spoilers say Willow Tait (Katelyn MacMullen) will drop her guard. She may open up a bit more to Michael Corinthos (Chad Duell) or possible let herself fall harder for Harrison Chase (Josh Swickard). Regardless, GH fans can expect a shocker for Willow later.

Willow will be taken aback by how much emotion she feels when she sees spots Michael with “Wiley” Cooper-Jones. That’s not really her baby, but Willow doesn’t know that yet. She may do her best to get closer to Michael and try to spend more time with the kid she believes is her son. This could really mess up Chase’s plans for a future with the gloomy teacher.

Other GH spoilers say Lucy Coe (Lynn Herring) will face off with Ava Jerome (Maura West). She’ll lash out at Ava for stealing Laura Collins’ (Genie Francis) man, but Ava will defend herself. “Dr. Kevin Collins” aka Ryan Chamberlain (Jon Lindstrom) had already pushed Laura away by the time he started things up with Ava. Besides, Ava won’t think it’s any of Lucy’s business who she dates!

Over with Shiloh Archer (Coby Ryan McLaughlin), he’ll ooze that usual creepy charm. Shiloh seems nice on the surface, but it’s also easy to see that dark side lurking just underneath. General Hospital spoilers say Shiloh will try to fool someone else, but not everybody in PC buys the hype. It should be interesting to see how people react to Shiloh as his circle widens.

Sam McCall (Kelly Monaco) will keep working with Jason to trip Shiloh up, so let’s hope they can pull it off. They need to work fast or else Kristina Corinthos-Davis (Lexi Ainsworth) could be in real danger. We’ll give you updates as other GH details emerge. Stay tuned to the ABC soap and don’t forget to check CDL often for the latest General Hospital spoilers, updates and news.