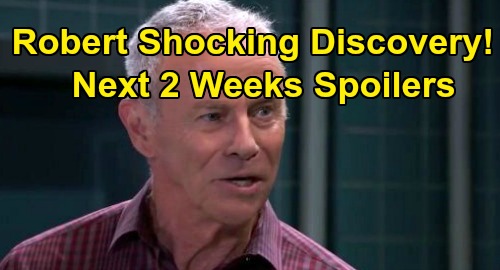 General Hospital (GH) spoilers for the next two weeks tease that the excitement’s about to rev up in Port Charles. During the week of October 14-18, Valentin Cassadine (James Patrick Stuart) will be taken aback. He’ll make preparations to fly to Greece with Charlotte Cassadine (Scarlett Fernandez), but Sasha Gilmore’s (Sofia Mattsson) could give him another chance at happiness with Nina Reeves (Cynthia Watros).

Michael Corinthos (Chad Duell) will grow increasingly concerned about Sasha’s latest lie, but the damage is done. He’ll just have to hope Sasha doesn’t get caught. Over with Maxie Jones (Kirsten Storms), she’ll be brought up to speed on the story and suggest that she’s relieved. Maxie will be pleased that Nina isn’t losing everything, but Sasha’s version of events will leave Lulu Spencer (Emme Rylan) facing more backlash.

GH spoilers say Maxie will blast Lulu for sharing the big secret without having all the facts. She’ll believe Liesl only found out the secret a few days prior to the wedding, but Lulu may find that tough to believe. You can bet Lulu will doubt Valentin’s innocence as well, but Maxie will feel like her friend’s just holding a grudge.

Meanwhile, Brad Cooper (Parry Shen) will head to Nelle’s parole hearing. He’ll be sweating bullets as he worries about what Nelle might do with her freedom. Elsewhere, Dev Cerci (Ashton Arbab) will suggest that he’s interested in Josslyn Jacks (Eden McCoy) romantically. Will Dev share this news with Josslyn herself or confide in someone else?

It’d be interesting if Dev admitted it to Cameron Webber (William Lipton), who clearly has feelings for Joss as well. However, Cam will be pretty caught up in Franco Baldwin’s (Roger Howarth) drama. As Elizabeth Baldwin (Rebecca Herbst) watches Scott Baldwin (Kin Shriner) prepare for the trial, Cameron will approach Kim Nero (Tamara Braun). He may try to talk some sense into her before they head to the courtroom.

As for Jason Morgan (Steve Burton), he’ll be more motivated than ever after Sam McCall’s (Kelly Monaco) next arrest. Jason will show fierce determination as he works to prove Peter August (Wes Ramsey) is guilty. He’ll get some help from Andre Maddox (Anthony Montgomery) and fight hard for Sam’s sake.

During the week of October 21-25, Ava Jerome (Maura West) will suffer a starling collapse. Laura Webber (Genie Francis) will fear Ava’s not handling her stress level very well. She’ll try to be supportive as Ava works through this crisis.

Other General Hospital spoilers say Robert Scorpio (Tristan Rogers) will eavesdrop on a disturbing conversation. Will that point to more guilt for Peter? Robert and Jason may need to compare notes soon. If they work together, they might expose Peter’s dark schemes sooner.

Back with Nina, she’ll get an extravagant gift – most likely from Valentin. He’ll probably send Nina to something special to thank her for believing in him. Valentin will want to shower Nina with attention and get their romance back on track. Thanks to Sasha’s phony story, Nina may even apologize for thinking the worst of Valentin!

Across town, Jason will be there for Danny Morgan (Porter Fasullo), who may be struggling over his mom’s predicament. Sam and Jason will be dealing with a lot thanks to Peter, but they’ll try to shield Danny from most of it. Let’s hope Danny can still have a fun father-son day with Jason.