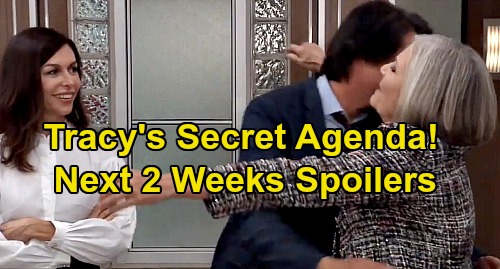 General Hospital (GH) spoilers for the next two weeks tease that we’ll see some hot drama. During the week of December 23-27, GH fans can expect lots of Christmas fun. For starters, there’ll be a special episode that focuses on Hamilton Finn (Michael Easton). After Finn almost ruins the magic of Santa for Violet Barnes (Jophielle Love), he’ll have some lessons to learn about embracing the holiday spirit.

Finn will do that when he wakes up as Ebenezer Scrooge in GH’s version of A Christmas Carol. This fantasy episode will feature familiar faces in new roles, so it should be a blast. We’ll get back to the regular action soon after. Franco Baldwin (Roger Howarth) will have plenty to process thanks to Elizabeth Baldwin’s (Rebecca Herbst) latest revelation. Liz admitted that Franco slept with Kim Nero (Tamara Braun), so he’ll undoubtedly be angry with both himself and Kim.

Of course, Liz doesn’t hold Franco responsible for the things he did as “Drew Cain,” but that won’t stop him from feeling guilty. Liz will give Franco support after he apologizes for the pain she’s endured. They’ll take some big steps forward as they work toward a brighter future together. It’s nice to see “Friz” getting back on track.

Meanwhile, the Quartermaine mansion will be buzzing after Tracy Quartermaine (Jane Elliot) returns from Amsterdam. General Hospital spoilers say Ned Quartermaine (Wally Kurth) will be suspicious of the reason for this comeback, but Tracy won’t see why he should be. She’ll feel like she should be allowed to visit her family without getting grilled, but the truth is Ned’s right. Tracy does have some secrets, so those will have to be exposed in time.

Over with Nelle Benson (Chloe Lanier), she’ll be more determined than ever. After Nelle’s encounter with “Wiley Cooper-Jones” (Erik and Theo Olson) at GH, she may become obsessed with getting out of Pentonville and taking Jonah back. That’ll present some major challenges, but challenges have never stopped Nelle from going after what she wants!

During the week of December 30-January 3, Laura Webber (Genie Francis) will try to convince Charlotte Cassadine (Scarlett Fernandez) of something. It sounds like Laura will work to persuade the kid that this secret bodyguard of hers isn’t real. Laura may point out that the man Charlotte pointed to in the pic is dead Nikolas Cassadine (Marcus Coloma) and can’t be someone she actually talked to.

Charlotte will stand her ground since Nik really has approached her multiple times. She’ll undoubtedly be frustrated when Laura refuses to believe her. Next, Sonny Corinthos (Maurice Benard) will battle a sense of deep betrayal. He should learn Carly Corinthos (Laura Wright) hid the truth about Nik’s survival, so that’ll bring more conflict for “CarSon.”

Sasha Gilmore (Sofia Mattsson) will also rush to Valentin Cassadine’s (James Patrick Stuart) defense. It sounds like Nina Reeves (Cynthia Watros) will follow through on her promise to destroy Valentin. She may dump him at the altar and reveal she’s been playing him all along. If so, you can bet Nina will rip into Valentin over the fake daughter scheme – which he orchestrated unlike Sasha claimed.

Sasha won’t want to see this romance explode, so she may do what she can to salvage it. As for Michael Corinthos (Chad Duell), he’ll end up trying to serve as a distraction for Sasha later. She’ll be glum about the pain she caused and all the chaos it’s still creating.

Other General Hospital spoilers say Jason Morgan (Steve Burton) will face a difficult fate. He’ll have to accept it after Diane Miller (Carolyn Hennesy) confirms terrible news. There’s speculation out there that Sam McCall (Kelly Monaco) will face some conditions as part of her parole – like staying away from Jason Morgan (Steve Burton) and the trouble that follows him. Whatever the case, “JaSam” fans are in for another round of problems.

Finally, Trina Robinson (Sydney Mikayla) will make a deal with Cameron Webber (William Lipton). Let’s hope it’ll bring them closer since we could use some romance among the teens. We’ll give you updates as other GH details emerge. Stay tuned to the ABC soap and don’t forget to check CDL often for the latest General Hospital spoilers, updates and news.