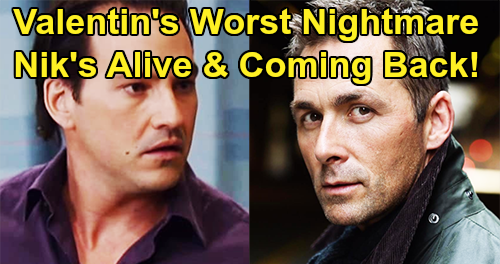 General Hospital (GH) spoilers tease that several storylines are building to a major GH bombshell. Nikolas Cassadine (last played by Nick Stabile) anvils have been dropping like crazy, so we should start seeing solid signs of his comeback soon. There’s no confirmation on his return yet, but we’d bet big money on it since there have been a ton of Nikolas mentions and Sibley Gamble (Veronica Cartwright) couldn’t feel Nik’s presence.

Cassandra Pierce (Jessica Tuck) was spotted with a mysterious man, but Robert Scorpio (Tristan Rogers) suggested no one could get close enough to identify him. Of course, it makes sense that Cassandra’s mystery man is the same one she was spotted leaving the clinic with. Someone picked Cassandra up – and his ring happened to be sporting the Cassadine crest.

That doesn’t necessarily mean it was Nikolas, but it certainly looks that way with all the comeback clues. Hayden Barnes (Rebecca Budig) talked to Laura Webber (Genie Francis) about Nikolas as well as Spencer Cassadine’s (Nicolas Bechtel) long-held grudge. Since Hayden’s working with Jasper “Jax” Jacks (Ingo Rademacher), who has a file on Cassandra, it seems like this is creating one giant return web for Nikolas.

Will Wyndemere Discovery Point Them To Nikolas Cassadine?

Will Hayden and Jax’s Wyndemere discovery lead them to the truth? It’s possible the shocker they uncover will point them in the direction of an alive Nikolas. Whether it’s hard evidence or just a crucial clue, that would be a huge deal. General Hospital spoilers say Jax and Hayden may have a different objective in mind, but you never know what’s lurking in the nooks and crannies of Wyndemere.

Right now, Valentin Cassidine (James Patrick Stuart) has juggling several serious threats. He’s calmed down about Sasha Gilmore (Sofia Mattsson) and has accepted that it’s good for Nina Reeves (Cynthia Watros) to have her around. However, Sasha’s a threat whether Valentin’s comfortable with her presence or not. There’s always the chance for slipups and screwups.

Jax and Hayden are definitely a concern here as well. Valentin will keep an eye on them as he works to neutralize Liesl Obrecht (Kathleen Gati). He’ll do everything he can to keep his happy life with Nina intact and keep their wedding plans moving forward.

Could Nikolas Cassadine Be An Unexpected Wedding Guest?

Of course, it may be Nikolas who’s the greatest threat of all. Nik would undoubtedly love to come back on the scene and become Valentin’s worst nightmare. There’s a good chance Nikolas’ revenge plot is already in motion with a little help from Cassandra. Jax and Hayden could be the ones to figure out what’s going on.

Maybe Nikolas could arrive just in time to blow up Valentin and Nina’s wedding. Derailing their nuptials would really shake things up. It’d be a fun way to reintroduce the character, too. A Soap Opera Digest blind item hinted that a popular role would be recast on one soap, so Nikolas on General Hospital makes perfect sense.

All signs point to Nikolas Cassadine being alive and returning to PC eventually. Are you excited about the likelihood of Nikolas’ comeback? We’ll give you updates as other GH news comes in. Stay tuned to the ABC soap and don’t forget to check CDL often for the latest General Hospital spoilers, updates and news.