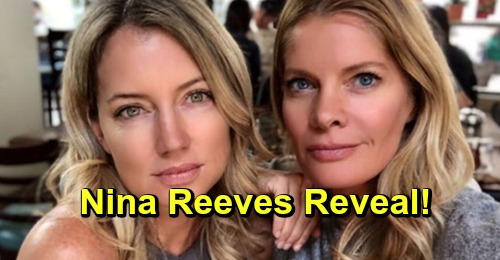 General Hospital (GH) spoilers reveal that the fan reaction has been mixed when it comes to the Nina Reeves (Michelle Stafford) recast. Some GH viewers are sad to see Stafford go and have found it hard to think of anyone else playing Nina. Others are accepting Cynthia Watros in the role with open arms. There are even some fans who just don’t feel it’s necessary to keep Nina on canvas.

However, Nina is sticking around for now, so everyone might as well get used to the idea. Fortunately, a new pic from Stafford is already helping fans adjust. Even some people who were on the fence about Watros are suddenly on board with the recast. That’s because Stafford offered a side by side comparison, and there’s no denying that Watros has the right look for the part.

Stafford met up with Watros recently, so perhaps they wanted to discuss Nina and her future. Since Stafford is passing the torch, she might’ve given Watros some tips. Watros is set to begin filming in early June, so she could undoubtedly use some pointers about who Nina really is and what she should be like. It never hurts to do a little more research and be fully prepared.

Of course, Watros will inevitably put her own spin on Nina, but it’s still worth getting some advice and figuring out where Nina goes from here. It’s great that Stafford seems to approve of General Hospital’s pick to replace her. They were both looking lovely in the photo Stafford shared on Twitter. She tweeted, “Just 2 actors talkin about acting today” and added a heart emoji.

Many GH fans piped up in approval after the pic was posted. “Okay this selfie makes the transition from Stafford to Watros easier,” said one viewer. “I was concerned about the future of the character of Nina till I saw who is the new Nina and I know it’s in excellent and talented hands,” said another.

One more fan even suggested they could be twins! While that might be a bit of a stretch, it’s nice that Watros doesn’t look wildly differently from Stafford. They have a similar overall look, so it won’t be too jarring when Watros finally debuts – especially since we got this pic as a sneak peek.

What do you think of this tale of two Ninas? Now that you’ve seen them in a photo together, are you convinced? Do you approve of Watros taking over the part?