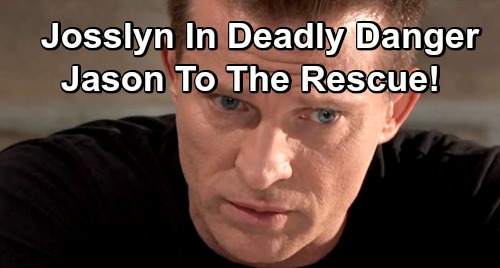 General Hospital (GH) spoilers tease that Josslyn Jacks (Eden McCoy) will focus on her goal. She’s having a hard time dealing with Oscar Nero’s (Garren Stitt) terminal illness, but she’s trying to stay strong. As difficult as it is to lose Oscar, Joss knows she doesn’t have it the roughest here. Oscar is the one who’s dying, so Josslyn will show her strength and be his rock throughout all this.

Dr. Terry Randolph (Cassandra James) admitted that Oscar could have as little as six weeks left. That’s not very many days to cram in all the things Oscar and Josslyn want to do. These teens would’ve preferred at least a year to savor these fun moments, but that’s just not going to happen.

Josslyn and Oscar reevaluated his planner, which helped a bit. They were able to cut a few items, so that should help moving forward. They have to concentrate on the bucket list essentials that’ll make the remainder of Oscar’s life fulfilling. Cameron Webber (William Lipton) will support them and help in any way he can.

Unfortunately, Oscar’s nothing-left-to-lose mentality will bring serious trouble. He may be dying in a matter of weeks, but Josslyn’s got her whole life ahead of her. She certainly doesn’t need to be putting herself in a deadly situation. Oscar doesn’t either since he could rob himself and his loved ones of his final weeks.

Dr. Kim Nero (Tamara Braun) and Drew Cain (Billy Miller) still need a chance to fully come to grips with Oscar’s passing. They’ve accepted that Oscar’s dying, but that doesn’t mean they’re ready to lose him so soon. Both Drew and Kim deserve an opportunity to say goodbye to their son. That can’t happen if he gets himself killed doing something reckless.

Thankfully, GH fans can expect someone to step up when Oscar and Josslyn need him most. Jason Morgan (Steve Burton) will realize the teens are in harm’s way, so he’ll come to their rescue. As Sam McCall (Kelly Monaco) looks on, Jason will leap into action and put his own life at stake in the process.

General Hospital spoilers say Carly Corinthos (Laura Wright), Sonny Corinthos (Maurice Benard), Drew and Kim should all be relieved soon. Jason will come through as usual and restore Oscar’s shot at bidding his family farewell. Josslyn should also be just fine in the end, so that’s great news.

What dangerous bucket list item will Oscar and Joss try to cross off? Are you excited to see Jason in hero mode? Are you dreading Oscar’s imminent death or is the drama of it all worth it to you? We’ll give you updates as other General Hospital details emerge. Stick with ABC’s GH and don’t forget to check CDL often for the latest General Hospital spoilers, updates and news.