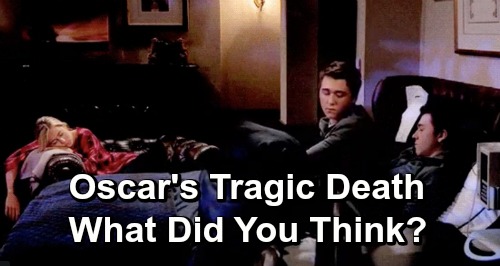 General Hospital (GH) spoilers reveal that Oscar Nero’s (Garren Stitt) farewell episode has led to a debate on social media. The special that aired on May 1 definitely had GH watchers talking. Some fans loved it and others hated it, so which side are you on?

Several viewers have been cursing GH writers for making it look like Oscar was going to make it. Most realized that some terminal patients rally in the end and assumed it would be written that way, but others ignored the reality aspect and wanted to deny the inevitable. Despite General Hospital spoilers that confirmed Oscar’s passing, some GH watchers thought it’d be a true miracle.

Many viewers also missed the subtle and even not-so-subtle clues that the recovery was a dream sequence. The inclusion of Lila Quartermaine (Anna Lee) and Edward Quartermaine (John Ingle) was the biggest clue of all. They’ve been dead for years, and Oscar never knew them. Neither did Drew Cain (Billy Miller) for that matter, so some fans weren’t fond of that part.

Some fans argued that it was disrespectful to the actors who are both deceased. General Hospital obviously had to use stand-ins here. They made them escorts for Oscar the insta-Quartermaine, so that didn’t please some viewers. There are people who feel like if the real actors can’t be used, their characters shouldn’t be used either.

Why didn’t someone else come for Oscar? Stuart Damon who played Alan Quartermaine is still alive, so why not use a living actor and have his grandfather come for him? Some fans felt this would have been a much more acceptable option than Lila and Edward.

Another sticking point seems to be Dr. Kim Nero (Tamara Braun) and Drew not being present when Oscar died. If Drew’s grandparents were going to come for his son, shouldn’t Drew have been in the room when his child passed? Wouldn’t Kim and Drew have felt better if Oscar told him who was there to escort him to the other side?

Oscar also stated he didn’t know who Lila was. Hadn’t he seen pictures of Lila and Edward in the Quartermaine house in the time he’d been there? It seems like Oscar would recognize his great grandmother from her photos, so how could he not know?

However, there’s no denying that the GH cast did a fantastic job. This episode also got fans excited one way or the other, so that’s a good thing. It’s always nice to get viewers engaging with other viewers and voicing their opinions.