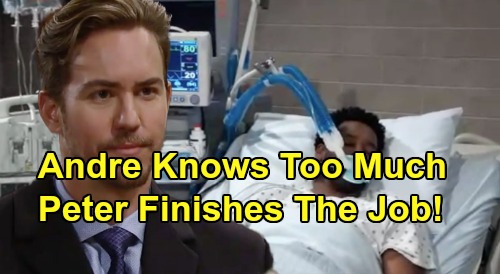 General Hospital (GH) spoilers tease that mysteries will continue to swirl around Dr. Andre Maddox (Anthony Montgomery). He stumbled into the ER and quickly fell into a coma, so Jordan Ashford (Briana Nicole Henry) isn’t sure what’s going on. Unfortunately, Drew Cain (Billy Miller) is still nowhere to be found, so he can’t offer any explanation.

Of course, that’s exactly what Peter August (Wes Ramsey) had in mind. GH fans will recall that Peter made a phone call to ensure that Drew would never find Andre. This is obviously Peter’s doing, so General Hospital is heading in an even darker direction with him. Good guys don’t have people put in comas!

However, there’s always further to fall. When Peter gets updates on Andre’s condition, what will his next move be? The goal was to prevent Drew from seeking out Andre for Franco Baldwin’s (Roger Howarth) memory reversal, but isn’t Andre still a threat on his own? Peter didn’t think seem to think so before Drew set out on his mission, but perhaps he thought Drew could be the one to crack Andre.

Regardless, we’re dealing with a whole new game now. Andre may realize who attacked him and why. He might also know details on Drew’s fate and who was behind that, which is another interesting point. Since Drew has vanished for now, did Peter’s minions target both Andre and Drew? This could mean double trouble for Henrik!

General Hospital wanted Andre alive instead of dead for this portion of the story. They could’ve just had a corpse somewhere, but they took the coma route. There are seemingly two options to consider now. Andre could wake up and be too terrified to reveal much of anything, especially if Peter comes around spouting off warnings.

Then again, this is the prime opportunity to show just how dark Peter can go. Could he plan to finish Andre off at GH? With the evil glint that’s been in Peter’s eyes lately, no one would be surprised! We know Monica Quartermaine (Leslie Charleson) will visit the ICU next week, but that doesn’t reveal if Andre will be awake – or what Peter might do before or after.

Will Peter dig a bigger hole for himself by trying to kill Andre himself? Even if he doesn’t succeed, Peter could raise more suspicions with Robert Scorpio (Tristan Rogers). Other than Andre and Shiloh Archer (Coby Ryan McLaughlin), Robert seems to be Peter’s greatest threat. He isn’t fooled by this nice guy act and seems destined to expose Peter’s shadiness down the road.