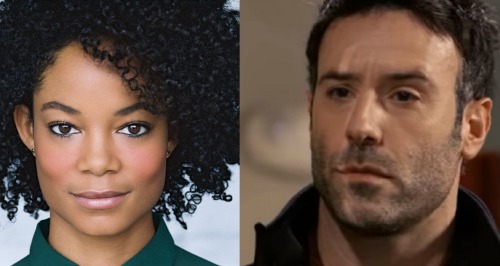 General Hospital (GH) spoilers reveal that Paulina Bugembe will debut in the role of Valerie Spencer soon. GH doesn’t use Valerie very often, but it looks like they had a plan in mind and just couldn’t leave her out of it. Brytni Sarpy departed to take on a new contract role at Y&R, so General Hospital had a hole to fill. They found Bugembe as a replacement, so Valerie’s about to get back in the action.

It turns out Valerie will be a huge part of the upcoming Dawn of Day drama. There’s no confirmation on Bugembe’s first official airdate yet, but we know when Valerie next pops up in General Hospital spoilers. Valerie’s name is mentioned starting May 3 when Alexis Davis (Nancy Lee Grahn) manages to sneak by her. That’ll undoubtedly be related to Kristina Corinthos-Davis (Lexi Ainsworth).

Of course, previous General Hospital spoilers pointed to Bugembe debuting a bit earlier. New Valerie may be onscreen before May kicks off since the PCPD will investigate Kristina’s disappearance next week. Teaser info doesn’t always include every name and detail, so perhaps Bugembe’s Valerie will just appear out of the blue.

Regardless, GH fans will be eager to see Valerie step up for Kristina’s sake. Despite Kristina’s attempts to push Valerie away, Val still cares for her a great deal. You can bet she’ll do whatever it takes to find Kristina and protect her, but things could get pretty complicated. After all, Kristina’s kidnappers are actually on her side.

General Hospital spoilers also suggest Kristina may escape next week, but there’s always a chance Jason Morgan (Steve Burton) and Sonny Corinthos (Maurice Benard) will track her down before she makes it back to Shiloh Archer (Coby Ryan McLaughlin). We also know Kristina will relax a bit and laugh with an old pal on May 3. Will that be Valerie?

It’s possible Kristina will be a free woman, but there’s also a chance Sonny and Jason will bring Valerie in the loop. After all, they can’t trust Margaux Dawson (Elizabeth Hendrickson). They need someone on the inside at the PCPD who can sabotage the Kristina search and buy them some time. They might even think Valerie can talk some sense into Kristina if they leave them to chat.

There’s also that sneaky Alexis spoiler we mentioned. She may simply not want to be associated with this kidnapping crisis, especially since Shiloh could be on the verge of exposing dirt on her. Alexis may be the one who has to hide out next!

General Hospital spoilers say Valerie will find herself facing a serious threat during the week of April 29-May 3. Will that be Margaux laying down the law about secrets? Could it be menacing Shiloh instead? If Shiloh goes after Valerie, maybe it’ll finally prove to Kristina that he can’t be trusted.

GH viewers won’t want to miss all the chaos ahead. We’ll give you updates as other news comes in. Stay tuned to the ABC soap and don’t forget to check CDL often for the latest General Hospital spoilers, updates and news.