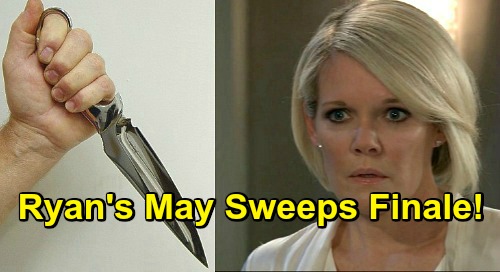 General Hospital (GH) spoilers tease that Ava Jerome’s (Maura West) determination will grow stronger. After everything Ryan Chamberlain (Jon Lindstrom) put her through, there’s no way Ava’s rage will ever truly die down. There’s only one thing that can curb her anger and that’s deadly revenge.

Other storylines have become taken center stage lately, but don’t worry. The Ryan drama is far from over. General Hospital spoilers reveal that Ava will soon kick her Ryan takedown plot up a notch. She’ll ask Scott Baldwin (Kin Shriner) to help her out, but it looks like he’ll turn her down flat.

There’s always a chance Scott will change his mind, especially since Ava can be awfully persistent. However, it’s also possible Ava will have to shift strategies. Felicia Scorpio (Kristina Wagner) and Laura Webber (Genie Francis) agreed that Ryan wouldn’t be able to handle Ava dating someone else. If Scott won’t agree to pitch in with a fake romance, Dr. Kevin Collins (Jon Lindstrom) might.

GH fans can expect Kevin to find a path to closure soon. Mac Scorpio (John J. York) will also discover something infuriating during the week of April 29-May 3. That could line up with some confusion about Ava and Kevin’s phony love story.

Then again, Ava’s the kind of gal who will handle this alone if she has to. She’ll do whatever it takes to draw Ryan out of hiding and make him pay for brutally murdering Kiki Jerome (Hayley Erin). General Hospital spoilers say Curtis Ashford’s (Donnell Turner) Canada search will bring an interesting clue. You can bet Ava will pester Curtis about that as she works to learn more.

Of course, Ava was also recently spied on in Port Charles. Someone outside Charlie’s Pub was lurking, so Ryan may be lying in wait. If that’s the case, it could lead to more peril. Ryan might be a step ahead of Ava as she tries to trick him, so she’ll have to stay on guard.

Nevertheless, Ava won’t give up or let fear take over. General Hospital spoilers say Ava will get a disturbing phone call right as May sweeps begins. The previous calls were deemed robocalls by Curtis, but Ava never bought that. When she receives her next one, there’ll probably be no mistake that the person on the other end is very real and incredibly dangerous.

It sounds like Ryan will officially make contact, so his showdown with Ava can’t be too far off! We’ll give you updates as other GH news comes in. Stick with the ABC soap and don’t forget to check CDL often for the latest General Hospital spoilers, updates and news.