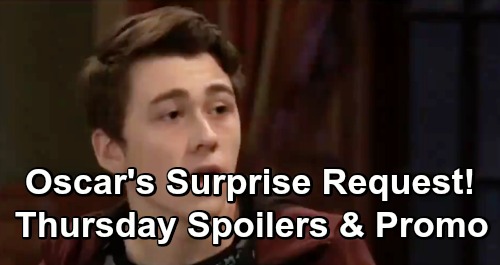 General Hospital (GH) spoilers for Thursday, April 18, tease that Anna Devane (Finola Hughes) will remain distraught over all the memory drama. She’ll worry about how and when to tell Robin Scorpio-Drake (Kimberly McCullough), but Dr. Hamilton Finn (Michael Easton) will have a different perspective. He’ll wonder if Robin really needs to know any of this – at least right now.

Finn may argue that there’s no point in turning Robin’s life upside down. It’ll only add to Anna’s stress, so Finn may suggest holding off until they have confirmation. Why upset Robin with the news that she may not be Anna’s daughter if that news isn’t true? However, Anna may not like the idea of keeping secrets. In the end, she’ll just have to decide what’s best for their relationship.

Other General Hospital spoilers say Oscar Nero (Garren Stitt) will move in the Quartermaine mansion. As he gets settled in, the dying teen will have a favor to ask. Oscar will be delivering his request to Olivia Quartermaine (Lisa LoCicero) and Ned Quartermaine (Wally Kurth) when Josslyn Jacks (Eden McCoy) walks in. She’ll wonder if she’s interrupting something as she looks on nervously.

While Oscar explains what he needs, Alexis Davis (Nancy Lee Grahn) will speak with Dr. Neil Byrne (Joe Flanigan). She’ll get the doc talking about his personal experience with cults, so perhaps we’ll hear a sad story about the patient Neil failed to help. This could tie in with Willow Tait (Katelyn MacMullen) somehow or it could simply be a little piece of Neil’s own history.

At the community house, Shiloh Archer (Coby Ryan McLaughlin) will offer plenty of reassurance to Sam McCall (Kelly Monaco). She acted uneasy about his plan to essentially con Jason Morgan (Steve Burton) and Sonny Corinthos (Maurice Benard), but Shiloh’s the one who’s truly being conned here. Sam’s just keeping up the charade and hoping everything will work out in the end.

However, another snag will arise when Shiloh wants to be in on this with Sam. He’ll insist that he won’t let her do it alone, but Sam may counter that she knows handle herself. She can’t let Shiloh get any closer to the situation or he might catch on and find Kristina.

Across town, Sonny will fret about Michael Corinthos’ (Chad Duell) updates. He just filled Jason and Sonny in on Willow’s confession about the pledge, so they’ll all fear the worst. Sonny will assume Shiloh has leverage on him now, but it’s actually Alexis who’s at risk. Kristina’s trust offering involved the truth about Alexis murdering Kiefer Bauer (Christian Alexander), so major family issues are brewing.

Finally, Carly will find herself all choked up on Thursday. This may be about Joss’ continued suffering and Oscar’s final weeks. General Hospital spoilers say Oscar’s storyline will bring another round of pain before long, so stay tuned.

It sounds like some gripping scenes are on the way. We’ll keep you posted as other GH details emerge. Stick with the ABC soap and don’t forget to check CDL often for the latest General Hospital spoilers, updates and news.