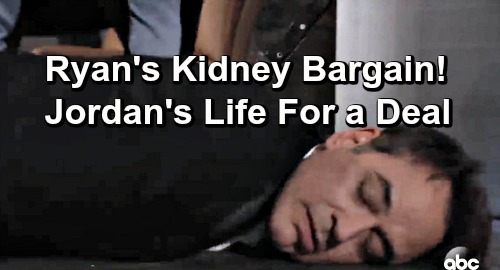 General Hospital (GH) spoilers reveal that Ryan Chamberlain (Jon Lindstrom) now has a huge bargaining chip. It could set him up to wreak havoc on Port Charles residents once again, so will he use it? The kidney situation could be Ryan’s ticket to causing more chaos, so it makes sense that he will.

Ava Jerome (Maura West) stabbed Ryan in the back after pretending she loved him and threatening to shoot him. She helped set up Ryan, and he played right into her hands. Ryan knows he was made a fool of and will certainly want to make both Ava and Dr. Kevin Collins (Jon Lindstrom) pay. Will Ryan get himself thrown back in Ferncliff where he could pull another twin switch or at least escape?

Ryan is a master manipulator and has taken over Kevin’s life before. He wouldn’t hesitate to do it again, but there’s the little matter of the missing hand. It’d take more work on Ryan’s part to hide that, but he could probably get by with it if his stint in PC was brief and he didn’t draw attention to a fake one.

However, GH fans may not be ready to see the twin swap revisited – at least not anytime soon. General Hospital writers might’ve taken that into account. Even so, Ferncliff clearly has terrible security measures. No matter how much they security they add, patients always manage to make quick getaways. A serial killer who wants to escape absolutely wants to wind up at Ferncliff.

Ryan would withhold that kidney to get his way and not think twice about doing so. He’s conniving and incredibly cruel. Ryan doesn’t care if Jordan Ashford (Briana Nicole Henry) dies as long as he gets what he wants.

Doctors can’t remove Ryan’s kidney without his consent unless he dies as an organ donor or Kevin donates his dead brother’s organs. If Ryan lives, it doesn’t matter that he is the only viable donor. Nobody can force him to give a body part to anyone. Ryan isn’t the giving type; his relationship with Ava shows that he is all about taking and will continue to take for as long as he can.

Ryan’s cockiness is what got him stabbed in the first place. He goaded Ava until she plunged the knife and would probably do it again. Ryan killed Kiki Jerome (Hayley Erin) and now threatens to keep Ava from Avery Corinthos (Ava and Grace Scarola), too. Ava could easily go to prison for attempted murder, which would mean life without her youngest daughter.

Ryan wanted to be the only person who mattered to Ava and since he wasn’t, he wanted to take her freedom as well. Will Ryan succeed in getting what he wants and take everything that matters to Ava away? Will Ava claim insanity and end up in Ferncliff with Ryan?