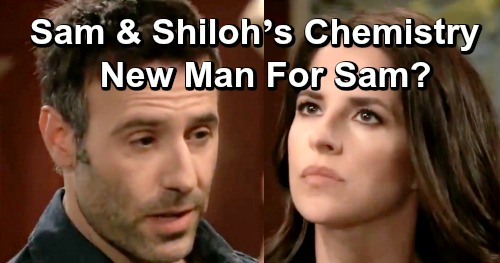 General Hospital (GH) spoilers tease that Sam McCall (Kelly Monaco) will remain on edge over Shiloh Archer’s (Coby Ryan McLaughlin) grip on Kristina Corinthos-Davis (Lexi Ainsworth). Kristina buys every word out of the guy’s mouth, but Sam thinks this is all a big scam. She’s convinced that Kristina is just part of the game for Shiloh, so she’ll keep an eye on the situation as best as she can.

Kristina is vulnerable and confused 90 percent of the time, which made her an ideal cult recruit. She’s eating their weird strategies and seminars right up. However, Sam lashed out over the tactics Shiloh was teaching. She didn’t approve of the stress Kristina was under, but an interesting revelation came out of that confrontation – and it wasn’t related to the plot.

When two characters move toward each other and engage in any kind of conflict, it becomes an opportunity. There’s a thin line between love and hate, so it allows us to see their chemistry. Shiloh remained calm and Sam tried to rein in her anger soon enough, but things were intense. This was an up-close encounter with some powerful looks.

Obviously, Sam and Shiloh loathe each other at the moment. There’s no romantic spark going on, but could there be later? Some GH fans liked what they saw. Plenty of General Hospital viewers are also digging Coby Ryan McLaughlin’s portrayal. He’s a solid actor who happens to be very handsome.

Should General Hospital really just throw Shiloh away as a full-on villain? If they let Shiloh go too far, he’ll probably have to be written out. However, they could dial it down in the end and redeem him. It could be like a Peter August (Wes Ramsey) situation. Regardless, many viewers think McLaughlin would be worth keeping around. He’s certainly got loads of connections on canvas to keep him busy.

Sam is one of the biggies, although Shiloh claims their link is a coincidence. We don’t buy that and neither does Sam, but that doesn’t mean Shiloh can’t back off in the end. People change and grow, so you just never know.

General Hospital spoilers say Jason Morgan (Steve Burton) will make his reunion with Sam official on next week’s new GH episodes, Janusry 21-25. They’ll hope to conquer the world together like they used to do. Unfortunately, the obstacles aren’t over for Sam and Jason. In fact, the latest GH info says they’ll face an incredibly surprising one.

What could their huge hurdle be? It’s probably not Drew Cain (Billy Miller) since he’ll be tied up with Oscar Nero’s (Garren Stitt) looming death. Drew will also grow closer to Dr. Kim Nero (Tamara Braun) in the coming weeks, so “Krew” seems more likely than a “Dream” reboot right now.

Could sparks fly between Shiloh and Sam at some point? Nothing would be more surprising than that! Whether it was an act on one or both of their parts, it might be a fun twist. Whatever the case, there are already some “Sham” fans out there. Social media would be buzzing even more if General Hospital actually went for it.

Are you a “JaSam” fan all the way or would you like to see Sam with someone else? What about Shiloh? Do you see the potential for a Shiloh and Sam romance, even if “Sham” is a real sham? We’ll give you updates as other GH news comes in. Stay tuned to the ABC soap and don’t forget to check CDL often for the latest General Hospital spoilers, updates and news.