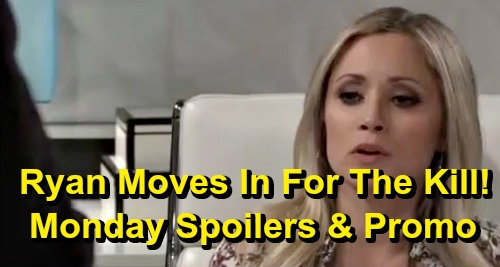 Lulu already left a message for “Kevin,” but she’ll go into detail on Monday. After Laura Webber (Genie Francis) mentioned the list “Kevin” had, Lulu did a little more digging. She realized that “Kevin’s” list had nine murder victims, but she could only find info on seven of them online. The discrepancy is a problem that must be dealt with, so Ryan will move in for the kill.

General Hospital spoilers say Lulu will suddenly get creeped out by “Kevin’s” behavior. He’ll inch closer as her eyes widen in shock. It looks like Ryan will pull out his knife and leave Lulu wondering what in the world he’s doing. By the end of this confrontation, it seems Lulu will be left in a fight for her life!

Meanwhile, Carly Corinthos (Maurice Benard) will be all riled up. During a conversation with Sonny Corinthos (Maurice Benard), Carly will insist that “he deserves what he gets.” Perhaps they’ll be discussing Port Charles’ latest serial killer. Carly may hope the culprit’s actions catch up with him soon. Little does she know Ryan was just minutes away from wiping Sonny and Carly out in the cemetery.

They’ll be free to chat at home while Ryan’s making a bloody mess out of Lulu. Later, Ryan will do some gloating. He’ll be happy with his handiwork, but perhaps he won’t realize he didn’t quite finish the job. Elsewhere, Laura will talk to Curtis Ashford (Donnell Turner) about “Kevin’s” new relationship. She’ll continue to be fed up and puzzled by “Kevin” and Ava Jerome’s (Maura West) bizarre spark.

Other General Hospital spoilers say Ava and Lucy Coe (Lynn Herring) will continue their fierce faceoff. Lucy will take some good jabs, but Ava won’t care. She’s happy with “Kevin,” so she won’t let the naysayers influence her romantic decisions.

At GH, Anna Devane (Finola Hughes) and Dr. Hamilton Finn (Michael Easton) will mull over the virus and how Anna contracted it. They’ll ponder ways to get to the bottom of this and as usual, Anna will want to act fast. She’s never one to wait around when it comes to solving mysteries. However, Finn will think he should take the lead on this. Anna’s still recovering, so Finn will just want to protect her.

Nearby, Dr. Kim Nero (Tamara Braun) will confide in Elizabeth Webber (Rebecca Herbst). She’ll admit she’s scared about losing Oscar Nero (Garren Stitt), but her fears will soon intensify. Kim won’t be able to get in touch with her son, so she’ll worry that something’s terribly wrong. It turns out Oscar and Josslyn Jacks (Eden McCoy) will get trapped during their catacombs adventure, so big trouble’s brewing.

General Hospital fans can also expect some walls to come down for Willow Tait (Katelyn MacMullen). She’ll feel like she’s been living a lie, so she’ll come clean about a few things to Harrison Chase (Josh Swickard). Will Willow admit she gave a baby up for adoption? Regardless, Chase will support Willow after she makes a huge confession.

Finally, Michael Corinthos (Chad Duell) will meet up with Lucas Jones (Ryan Carnes). He’ll want to talk about “Wiley” Cooper-Jones’ future, so he’ll suggest sharing a meal together. As “Wiley’s” godfather, Michael may want to make sure the kid’s all set when it comes to an education and whatever else he needs.

Michael will keep bonding with “Wiley,” who’s actually Jonah Corinthos, so expect more clues for this duped dad along the way. We’ll give you updates as other GH news comes in. Stay tuned to the ABC soap and don’t forget to check CDL often for the latest General Hospital spoilers, updates and news.