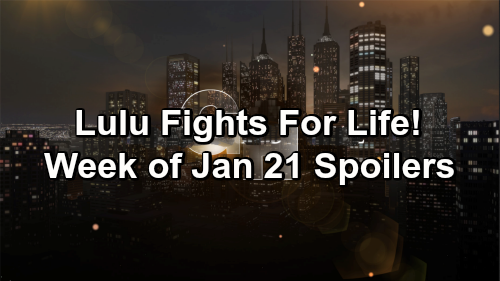 General Hospital (GH) spoilers for the week of January 21-25 tease that some shockers and shakeups are on the way. First, Ryan Chamberlain (Jon Lindstrom) will gloat over his latest round of chaos. However, he may not want to get too cocky. It seems Ryan’s latest victim will live to tell the tale, so this could be the beginning of the end for the devious killer.

After Lulu Falconeri’s (Emme Rylan) run-in with Ryan, she’ll face some struggles. It looks like Lulu will have to fight for her life at GH. General Hospital spoilers say Laura Webber (Genie Francis) will do her best to console Charlotte Cassadine (Scarlett Fernandez). Of course, Laura will be in need of comfort herself. This will be a rough time for all Lulu’s loved ones.

Later this week, Maxie West (Kirsten Storms) will get some positive updates. Will Lulu’s doctors have good news? Lulu may be in a coma for a while, but the fact that she’ll survive at all is a miracle. Ryan usually doesn’t leave his bloody victims breathing, so Lulu will fare better than most.

Over with Brad Cooper (Parry Shen), he’ll pay Julian Jerome (William deVry) a visit with “Wiley” Cooper-Jones. GH fans know Julian’s been a big help to Brad, so the least he can do is offer Grandpa some time with his grandson. Michael Corinthos (Chad Duell) will chat with Lucas Jones (Ryan Carnes) over lunch this week. They’ll discuss fatherhood, “Wiley,” and perhaps Michael’s plans for the future.

Michael may open his heart to having another child someday. He’s still trying to heal over Jonah Corinthos’ “death,” but he’s making progress. Willow Tait (Katelyn MacMullen) will remain drawn to the baby she believes is hers. When she spots Michael bonding with “Wiley,” Willow will long for what she can’t have. She may inch closer to “Wiley’s” godfather in hopes of connecting with her “son.”

General Hospital spoilers say Aiden Webber (Jason David) will get back in the kitchen this week. Franco Baldwin (Roger Howarth) is glad Aiden’s found a hobby that makes him happy. He goes through so much at school, so Franco will think they should make cookie-baking a regular activity. They’ll put a few more batches in the oven and talk about Aiden’s issues.

At the catacombs, Oscar Nero (Garren Stitt) and Josslyn Jacks (Eden McCoy) will land in grave danger. Jason Morgan (Steve Burton) will rescue them, but he’ll also land in a sticky situation of his own. Luckily, Sam McCall (Kelly Monaco) will swoop in and save the day. It’ll lead them back to Sam’s place for some sexy moments, so get ready for some true “JaSam” love in the afternoon.

General Hospital has another great week of episodes in store. We’ll keep you posted as other GH details emerge. Stay tuned to the ABC soap and don’t forget to check CDL often for the latest General Hospital spoilers, updates and news.