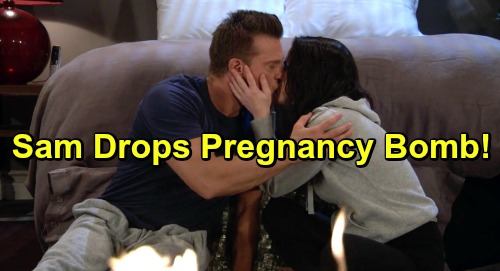 General Hospital (GH) spoilers tease that Jason Morgan (Steve Burton) will face a shocker. On July 18, Sam McCall (Kelly Monaco) will have a big surprise for the man in her life. She’ll drop some sort of bomb, so we’ll get to see how Jason reacts to it.

What kind of surprise could Sam have in mind? It’s possible it’ll be some news related to all the Shiloh Archer (Coby Ryan McLaughlin) drama. However, it sounds more like something special for “JaSam.” GH may let Sam plan a romantic evening around whatever surprise she’s got in store.

Of course, anytime we’ve got a soap couple that’s been hitting the sheets and a surprise is mentioned, the possibility of a baby comes into play. After all, General Hospital spoilers said Carly Corinthos (Laura Wright) would surprise Sonny Corinthos (Maurice Benard) – and she certainly did! Sonny never expected to become a father again, but he’s preparing for another little Corinthos now.

Likewise, General Hospital spoilers have been pointing to some looming curveballs for Jason and Sam. Everyone assumed those curveballs would come courtesy of Shiloh, but what if an unplanned pregnancy is one instead? GH already has this pregnancy storyline going on with Carly, but that doesn’t really matter. Carly could easily have a miscarriage at some point.

Even if Carly actually gives birth to her baby, that doesn’t exclude the possibility of a “JaSam” pregnancy. After all, Maxie Jones (Kirsten Storms) and Nelle Benson (Chloe Lanier) were pregnant at the same time. General Hospital is more than capable of juggling two baby plots. It’d be particularly heartbreaking for Jason since he’d be excited about own kid and worried about Carly’s. That’s drama!

We should also mention the fact that Scout Cain (Ella Ramacieri) was just rapidly aged. Could that be to make way for a new baby in Sam’s life? It’d be sweet for Jason to get a daughter of his own. He’d be happy with another healthy son as well, but “JaSam” fans would undoubtedly root for a little girl.

There’s no guarantee General Hospital will head in this direction, but it’d be an interesting bomb for Sam to drop. Would you like to see a new addition to the “JaSam” fam? Do you think Sam could deliver a pregnancy surprise? We’ll give you updates as other GH details emerge. Stay tuned to the ABC soap and don’t forget to check CDL often for the latest General Hospital spoilers, updates and news.