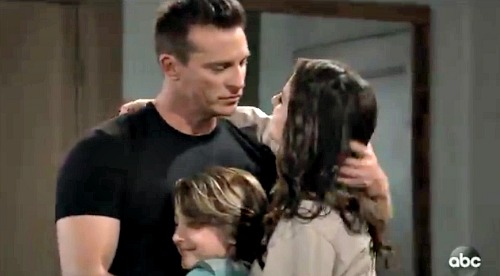 General Hospital (GH) spoilers reveal that Jason Morgan (Steve Burton) has been home for almost two years and has had very little time with Sam McCall (Kelly Monaco) or their son Danny Morgan (T.K. Weaver). Sam will proposition Jason soon, and that proposition could change things. What does Sam have in mind?

Sam could invite Jason over for some family time. Jason and Sam worked hard to get Kristina Corinthos Davis’ (Lexi Ainsworth) pledge back, so they deserve a break. Maybe a family dinner could be followed by playing with the kids and putting them to bed together.

Afterward, Sam and Jason could use some quality time alone. They’ve spent a great deal of time apart because of Shiloh Archer (Coby Ryan McLaughlin), so this is a good opportunity to reconnect. Jason came home after five years only to end up getting a divorce because his wife thought she was in love with another man. Sam had believed for quite some time that Drew Cain (Billy Miller) was her husband, Jason.

Could Sam suggest they remarry since they should’ve never divorced? After Sam ended her marriage, she accepted that she still had feelings for Jason. Sam and Jason are still in love and want to be together. Perhaps Sam will want to marry Jason again and pick up where they left off in 2012. Sam has proposed to other men, so it’s a reasonable suggestion. Could a “JaSam” marriage be on the horizon?

Of course, General Hospital spoilers say there are other options to consider. Jason and Sam haven’t been to their honeymoon cabin since Sam was pregnant with Danny. Could Sam suggest a weekend visit? Alexis Davis (Nancy Lee Grahn) could watch the kids for a couple of days, which would give Sam and Jason some time alone.

Sam and Jason wouldn’t have to worry about interruptions because they always turn the phones off there. It would be nice to have some cabin scenes on GH after all this time. Maybe Sam and Jason could even take the kids along and let them look at the stars like they used to do.

Sam’s penthouse belonged to Jason long before she came to Port Charles. Could Sam and Jason move back in together? Sam didn’t want to take the penthouse in their divorce, but Jason insisted. Could Sam want Jason to give up his apartment and move back into the penthouse with her and the kids?

Jason would probably be thrilled to come back home to the place they fell in love. It’d be wonderful if this is what Sam has in mind for their future. No matter what Sam has in store, General Hospital spoilers say Jason will surely get on board!