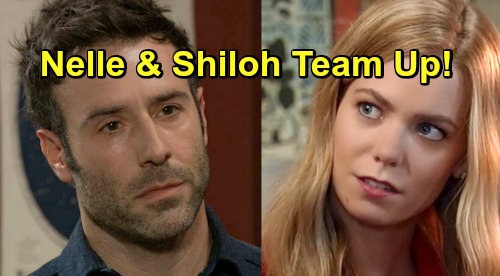 General Hospital (GH) spoilers tease that Nelle Benson (Chloe Lanier) will make a new pal. Who will befriend incarcerated Nelle and why? There isn’t exactly a long line of people who’d even want to be friends with Nelle. She never had too many of those, even when she was free in Port Charles.

Nevertheless, Nelle will indeed hit it off with somebody during the week of June 10-14. General Hospital spoilers say this will present some exciting options. It’s possible Nelle will simply make a friend who’s in the same boat. There might be a new inmate who’s got similar views and the same sassy attitude. They could plot their escape together if all goes well.

However, there’s also a chance Nelle’s new friend will be someone on the outside. Perhaps a PC resident will seek Nelle out in hopes of gaining an ally. We can think of at least one person who could use one – particularly an ally who loathes the Corinthos clan.

Of course, we’re talking about Shiloh Archer (Coby Ryan McLaughlin). GH spoilers say Shiloh will end up wiggling out of trouble with the law. Maybe he can promise to do the same for Nelle. He might have leverage on someone who could reduce Nelle’s sentence or at least get her moved to cushier prison. Having Shiloh promise to help Nelle escape wouldn’t be out of the question either.

Then again, Shiloh could just ask for Nelle’s help knowing she’d like to see the Corinthos family go down as much as he does. Nelle’s probably pretty notorious around Port Charles by now. Her name has surely come up at the Dawn of Day house. There are plenty of community members who would’ve heard Nelle horror stories.

Those horror stories would impress Shiloh. He could pay Nelle a visit and wonder if she can tell him anything that might bring Sonny Corinthos (Maurice Benard) down. Even if she can’t offer much, Shiloh would be open to Nelle’s thoughts on the family’s weaknesses. She might have some good revenge suggestions for Shiloh.

On June 10, General Hospital spoilers say Shiloh will try to charm someone. Will that someone be Nelle? If so, this hot plot will take an intriguing turn. That’s because Shiloh and Nelle wouldn’t realize they have a baby connection.

Shiloh knows he’s the father of Willow Tait’s (Katelyn MacMullen) child, but he doesn’t know that child’s dead or that Willow thinks the child is “Wiley.” Nelle swapped Jonah Corinthos for the real Wiley, but she wouldn’t know about Shiloh’s link to any of this at all. They’d both be in the dark on some crucial things that could come up later.

A Nelle and Shiloh alliance could bring serious drama, so it’ll be interesting to see if that’s how this plays out. We’ll give you updates as other GH news comes in. Stay tuned to the ABC soap and don’t forget to check CDL often for the latest General Hospital spoilers, updates and news.