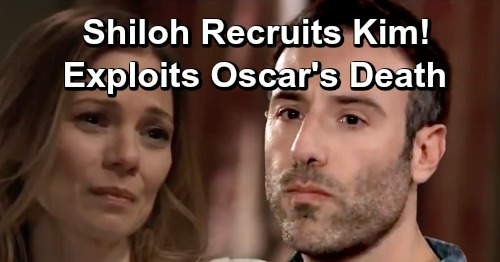 General Hospital (GH) spoilers tease that Dr. Kim Nero (Tamara Braun) will struggle to cope with Oscar Nero’s (Garren Stitt) passing. She tried to prepare herself, but how can you really prepare for the death of a child? From the moment Oscar entered the world, Kim focused almost solely on him. She still had her career, but it’s clear that being a mom was her priority.

Without Oscar around, Kim will face an identity crisis. She’ll be broken, vulnerable and in desperate need of comfort. Kim will feel like a piece of her is missing, so she’ll look for something that’ll fill that void. General Hospital spoilers state that Kim will seek help, but how she goes about it could be incredibly dangerous.

It certainly sounds like Kim could drift toward Dawn of Day and Shiloh Archer’s (Coby Ryan McLaughlin) teachings. She’s the perfect target based on all those things we mentioned. Kim’s in a fragile state of mind, which will allow Shiloh to feed her lies and take her in a potentially perilous direction.

In Thursday’s episode, May 2, General Hospital reminded fans of Shiloh and Oscar’s connection. Remember when Oscar was trying to be independent and moved in DoD house? Oscar found friends and joy in the community, so Kim may feel like this is a lingering piece of her son. She can’t be with Oscar, but she can be around people who mattered to him and still feel linked in some way.

Kim’s normally a skeptic when it comes to the kind of stuff Shiloh preaches, but things are far from normal now. She may be more susceptible to Shiloh due to her grief. After all, most GH viewers would’ve expected Brad Cooper (Parry Shen) to be too smart to fall for this. Instead, Brad’s loving Shiloh’s platitudes and believing all the hype. Why? Because it works for the story.

Having Kim join Dawn of Day would definitely work for the story as well. This could bring Drew Cain (Billy Miller) into it as he fights to protect Kim. They’ve been growing closer over the Oscar situation and that trend will continue in the coming weeks. If Kim ends up in over her head, Drew will be first in line to help her – and his buried memories could be the key to pulling it off.