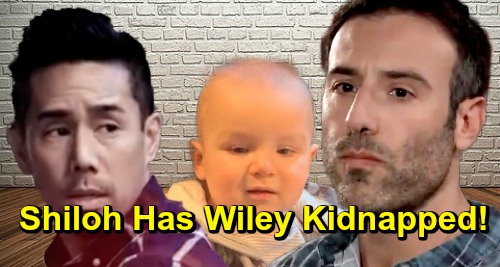 General Hospital (GH) spoilers tease that Willow Tait (Katelyn MacMullen) may regret getting mixed up in all the current Dawn of Day drama. She thought she made a clean break from this horrible cult, but she’s getting sucked back in – just in a different way. Willow is in no danger of buying what Shiloh Archer’s (Coby Ryan McLaughlin) selling again, but she’s got a secret just waiting to be exposed.

We’re not talking about Willow’s old pledge either. That seems like a non-issue since Willow just doesn’t care anymore. She’s done with DoD and only wants to keep her son – or the kid she believes is her son – safe and free from Shiloh’s tight grip. Unfortunately, helping Kristina Corinthos (Lexi Ainsworth) could cost Willow big time.

When Harrison Chase (Josh Swickard) realizes Willow may be mixed up in the kidnapping crisis, he’ll worry about the potential consequences. Willow’s knowledge of the situation could land her in hot water if she’s not careful. However, Chase will do whatever he can to keep Willow safe. We have no doubt that Chase would lie for Willow if need be. He’s too smitten to let her go down for this.

With that in mind, the real danger could come from Shiloh’s digging. If he determines that Willow’s helping out the enemy in addition to turning her back on him, Shiloh may look for other ways to hurt her. This could turn into more than just trying to get Willow back in Dawn of Day. General Hospital spoilers say it could become a revenge mission.

To make matters worse, Brad Cooper (Parry Shen) is treating Shiloh like a savior just like Kristina did. He doesn’t know that Shiloh is the original Wiley Cooper-Jones’ birth father, but he’ll find out eventually. Between Willow and Brad’s blunders, there’s no way Shiloh will stay in the dark for long.

General Hospital spoilers say Shiloh will ultimately learn Willow had his child. He’ll also discover that Brad and Lucas Jones (Ryan Carnes) adopted him, so a GH mess is brewing! You can bet Shiloh will be furious with Willow for keeping something so huge from him. He’ll undoubtedly go after the boy he thinks is his son, so Brad had better watch out.

GH buzz is that Shiloh will have baby Wiley kidnapped leading to some great action’s ahead. We’ll give you updates as other GH news comes in. Stay tuned to the ABC soap and don’t forget to check CDL often for the latest General Hospital spoilers, updates and news.