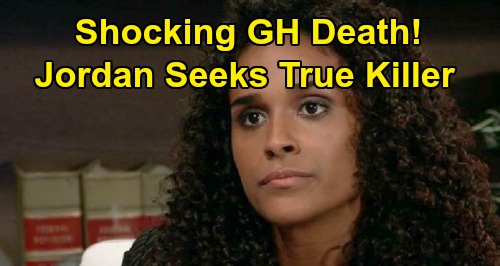 General Hospital (GH) spoilers tease that Jordan Ashford (Briana Nicole Henry) will find herself with a new case to crack. A mystery will land in her lap after the death of an old colleague, so Jordan will definitely have a motive to learn more. It sounds like this colleague of hers was someone Jordan considered a friend and respected a great deal.

When Jordan first hears about this colleague’s death, she’ll naturally face all the usual feelings of shock and sadness. On the surface, this man’s demise will most likely be ordinary. There may not be red flags to the casual observer, but Jordan’s not the casual observer! She’s someone with an eye for spotting clues as well as someone invested in the legacy this person leaves behind.

General Hospital spoilers say this will be a big story for Jordan and Curtis Ashford (Donnell Turner) as we head into 2020. Jordan will share her suspicions with Curtis and undoubtedly rely on his help at some point. It turns out things just won’t add up for Jordan. She’ll think there’s far more to the story when she looks at the facts of the case.

GH is staying tight-lipped on the details, but we know Jordan will view the way this person died as highly suspicious. It’s possible this man supposedly killed himself when he was previously someone who never would’ve done something like that – at least in Jordan’s opinion. She might start digging into his family background or searching for old enemies that might’ve staged the whole scene.

Of course, Curtis will surely have a mission or two throughout all this. There’s a good chance this case will end up being connected to another major storyline as well. Could it somehow wind around and link to the Peter August (Wes Ramsey) drama or perhaps Trina Robinson’s (Sydney Mikayla) mystery relative?