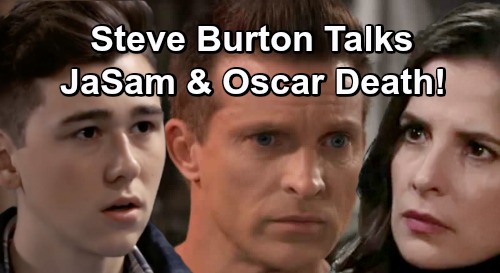 General Hospital (GH) spoilers tease that Jason Morgan (Steve Burton) and Sam McCall (Kelly Monaco) will keep up their efforts to score dirt on Shiloh Archer (Coby Ryan McLaughlin). They’ll have to keep their reunion private while they do, but they’ll hope the payoff will be worth it. However, GH fans can expect some danger before this storyline’s over. The road ahead certainly won’t be easy for “JaSam.”

In an interview with Soap Opera Digest, Burton dished on some recent GH developments and offered a sneak peek at what’s next. Naturally, the topic of Sam and Jason’s love scene came up. Jason hadn’t had a hot hookup in quite some time, so some steaminess was welcomed by “JaSam” lovers.

“I think there are celebrations going on all over the country right now,” Burton said. “I was not invited to any of ‘em, but I’m sure they’re happening somewhere. It was long overdue, let’s just say that.”

Burton has a podcast with Bradford Anderson (Damian Spinelli), so they’ve often joked about Jason’s lengthy celibacy run on it. When asked what they’ll tease Jason about now, Burton insisted they could think of something. “I’m sure there’s plenty of stuff coming up that we can have some fun with,” Burton said.

Burton added that if you want to call Sam out for getting scuba gear, you have to call GH out for all the outdated equipment at the hospital. Burton joked that the machines seemed like they were for 1972. He warned that this was no place to save a life, so “Oscar’s in big trouble.”

Burton was just kidding around, but he’s right about the big trouble part. General Hospital spoilers hint that Oscar will indeed die, so Jason will have to carry out Oscar’s dying wishes like he planned. Will the upcoming heartbreak bring Jason and Drew Cain (Billy Miller) closer? It’d definitely be nice to see the brothers start to bond a bit.